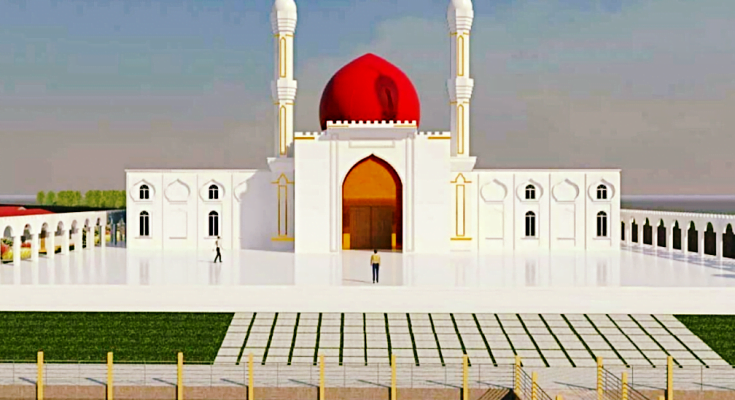 Grandmaster Waqar Faiz Qalandar’s sufi meditation sessions have helped people around the world – here’s all you need to know about the Sufi master and his love for humanity.

While many people are exposed to spirituality through books or trips to foreign lands, Grandmaster Waqar Faiz Qalandar was exposed to it right from his birth. Born and raised in Lahore, Pakistan, the Grandmaster’s spiritual walk was probably to be expected as Lahore is home to the shrines of several principal Sufi saints.

The inhabitants of the city are also very focused on Sufism, and one of the first Sufi saints to be buried there was one of the daughters of the Ultimate Master Ali, Ruqayya, who is known locally as the Chaste Lady (Bibi Paak Daaman).

Another significant saint buried in Lahore is the 11th Century Sufi master, Ali Hujweri, who is also known as Daata Ganj Bakhsh. Grandmaster Waqar Faiz grew up in the shadow of his shrine, which locals refer to as the Daata Darbaar.

In fact, the Daata Darbaar was built to house the grave of Ali Hujweri, and it soon grew to become one the most significant shrines in South Asia. To this day, Sufis from all over the world gather at the Daata Darbaar to pay their respects and meet fellow seekers.

HOW DID WAQAR FAIZ QALANDAR START HIS JOURNEY AS A SPIRITUAL GUIDE?

Waqar Faiz Qalandar came to the early realization that he needed a guide to help him on his journey, so he knew that to walk the path meant getting a guide – so he took initiation from a local Sufi master in his youth.

This master would later pass away before Waqar Faiz ever had the opportunity to sit and learn from him.

This soon became a pattern in his life until Hazrat Ali (The Ultimate Master of Sufism) himself appeared before Waqar Faiz and told him that he would be his direct master and teacher. During their interactions, Ali would sometimes instruct his student to perform spiritual exercises at the tomb of a Sufi master, where he would meet someone who would give him a particular item or relic.

Other times Waqar Faiz would be instructed to feed a specific person or people in the countryside who happened to be praying for the problems they were having. As part of his lessons from the Ultimate Master Ali, Waqar Faiz worked hard to rid his heart of desire of anything other than the Beloved.

His personal determination to be taken further into this journey came when he was given the realization that the heart is the faculty and kingdom of the Divine.

Grandmaster Waqar Faiz also took spiritual retreats that allowed him to seclude himself either in the wilderness or at the shrines of different Sufi masters. During the later part of his journey, he went on retreats in the mountains and he would successively keep himself secluded in Divine remembrance for 40 days and nights at a time.

His retreats were usually backed with fasting and meditating so as to intensify his love, purification, and communion with the Divine.

Eventually, after several years of fighting the lower self, and gaining spiritual sanctification, the Ultimate Master Ali gave Grandmaster Waqar Faiz the title of “Qalandar.”

WHAT KINDS OF INSIGHTS CAN PEOPLE GAIN DURING HIS SUFI MEDITATION SESSIONS?

To experience the Divine in every aspect of one’s life, one has to realize that the Creator left some signs in creation that would enable one to recognize His Light. These signs are not only found on the outside, but also on the inside of one’s own self – as they can both be realized through sufi meditation.

Regardless of one’s reason for carrying out meditation, Sufism is dedicated to fulfilling that purpose by permitting one to see and experience the signs of the Creator. Once these signs are seen within the self, it becomes easier to see them in one’s life and daily routine.

Although this sufi meditation would help remove the stress of daily activities, Grandmaster Waqar Faiz Qalandar made it clear that “The goal of this path is very high, and that is to reach the Ultimate Source, the One True Light. Once you connect yourself to the Ultimate Source, everything beautiful will come along with this Light.”

WHO CAN PRACTICE THE GRANDMASTER’S MEDITATION SESSIONS?

Throughout his spiritual life, Waqar Faiz Qalandar always emphasized the need to assist all of humanity, if not all of creation, thus making the meditation open to everyone, regardless of race, religion, ethnicity, or language.

In other words, Waqar Faiz Sufi Meditation sessions are open for participation by anybody who has an interest in soul exploration, spiritual awakening, spiritual healing, self-empowerment, stress reduction, and self-growth.

The sessions would also come in handy if a person is working on overcoming a challenging time, depression, fear, anxiety, finding peace and happiness, increasing love and compassion, or using wisdom to deal with day-to-day problems and difficulties.

PEOPLE THAT DON’T BELIEVE IN MEDITATION, CAN THEY GIVE IT A TRY?

As long as it is practiced with a pure heart, it can at the very least lead to curiosity, so whether it is a feeling of relaxation or a verbal conversation on a real-life lesson, any person that sits in Waqar Faiz Sufi Meditation can gain from it.

The person can get a deeper understanding of one’s own self, contentment, peace, stress relief, healing, or, most importantly, feel a connection to the Divine light.

Due to Grandmaster Waqar Faiz Qalandar’s open-to-all policy, the path of Sufism and Waqar Faiz Sufi Meditation sessions are taught and practiced in several parts of the world, including the United States, Brazil, Canada, India, Pakistan, the United Kingdom, the Middle East, and Australia.

Different classes can also be found by visiting the Waqar Faiz Sufi Meditation website as it has a list of events taking place online.

As long as there are individuals and communities that are willing to take it on, Grandmaster Waqar Faiz Qalandar will provide whatever is necessary to them.