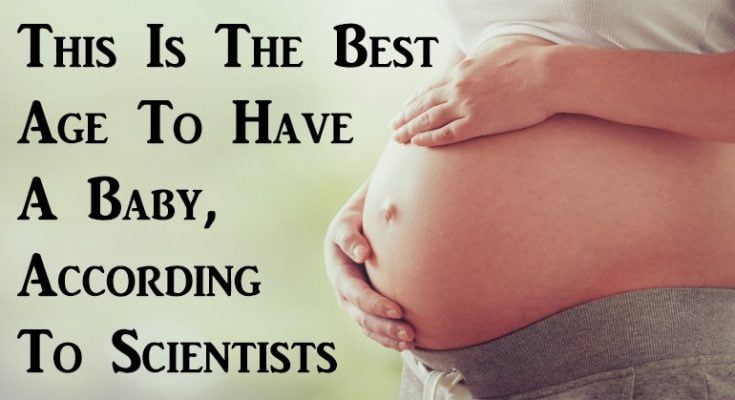 It’s like “Simon Says” only this time we are talking science and the perfect age to have a baby.

I didn’t know that there is science behind it. However, many women ask their grandmothers and mothers about this perfect time to have their baby.

They usually say that it’s between 24 and 27 years. The explanation is anytime later than that will make you an old mother.

I can’t see the “real deal” here, but you know how older people opinions are. Wait until you see what the science found. If you share this with them, their mind will go off.

So, what’s the perfect age to have a baby according to science?

The explanation behind these reports is that women between 30 and 40 are more secure about their position and with whom they are going to spend their life with.

They settled down, found the perfect job that brings them money every month, and they can afford to have a kid or two.

Even though the risk of having a child at 35 is probably bigger, scientists found that there are even a few benefits of it.

It’s a study from the University of Southern California. It revealed that giving birth after 35 years gives the mother a great mental boost.

830 women were involved in this research. All of them went through a series of tests on visual perception, planning, concentration, verbal memory, and attention.

When the results came, even the researchers couldn’t believe what they are seeing.

Women who had their first baby at the age of 24 performed better on mental acuity tests, problem-solving, and verbal skill. That’s when compared to those who gave a birth of their first child between 15 and 25 years old.

Listen to this, the women who had their first healthy baby over the age of 35 performed even better than those at the age of 24. Their results were astonishing in verbal memory and cognition.

Well, the lead researchers believe there is something about the hormones.

Your progesterone and estrogen levels surge during pregnancy. Both of them have a positive impact on the function and chemistry. The level is bigger if the pregnancy happens at a later age.

At the end of the day, all it matters is a healthy pregnancy and healthy baby. Nothing more, nothing less.

Before you decide to get pregnant later in your age, please consult with your doctor. Let him show you the positives of it.

What do you think?

READ NEXT: What’s the Proper Sleeping Position If You Are Pregnant?

Don’t forget to ask your friends for an opinion. Share this with them and let me hear all of you in the comments section below.