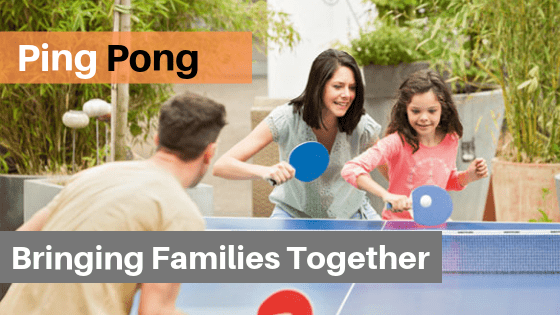 With summer at its height, it’s a great time to get out with kids and spend some quality time. While going to a beach or a museum is always fun, but it is a friendly competition that really brings the whole family together. And there is nothing better than a game of Ping Pong. The game is not only fun to play, but it’s also competitive and offers an all-around exercise. The game has always been America’s favorite pastime, popular among garage and club players.

If you or your kids have not played Ping Pong before, don’t worry. The game is relatively easy to pick, requires minimal physical effort and is suitable for all age groups. Kids, adults, old and everyone in between, can play the game with competitive zeal and vigor. The other advantage of the sport, it is relatively injury free and requires minimal investment to get started.

How the Sport Began?

Ping Pong has quite a bit of history behind it. The origin of the sport is often been debated and dates back to early 1800s. While some believe the game was invented by British soldiers stationed in India as an after-dinner sport. They used use cigar lid box as paddles, wine bottle cork as a ball and books as net. Back then the game was referred to as ‘Whiff-Whaff’. The other sections believes, it was developed as an indoor version of Lawn tennis (a popular game back then) in Britain.

With time the popularity of the game rose, and it was officialized in early 1900. But around 1920, due to a trademark conflict, the name of the sport was changed to its current official name – “Table Tennis.”

The game is still referred to as Ping Pong by causal players while professionally the sports is known as Table Tennis.

By the 1940s, Ping Pong was already a worldwide phenomenon, with China and other Asian countries dominating the scene. The official governing body International Table Tennis Federation (ITTF) was formed in 1926, and the first championship was held in the same year.

With the rising popularity and more and more countries playing the sport, table tennis was officially inducted in Olympics in 1988. Currently, it is estimated over 300 million players play the sport worldwide. In US alone, the game is seeing tremendous traction with several professional clubs popping up and promoting the sport.

Ping Pong is a unique game with many health benefits. While on mere looks the game may not look physically excruciating or challenging, but you can’t be more wrong.

The ease of playing the sport has led to wide-scale popularity among recreational players. But not many people are aware of the health benefits. The game is helpful in building hand-eye coordination among kids, promotes fitness, and even helps fighting depression. If new research is to believe, the game can help in slowing down the effect of Alzheimer’s.

A Relatively Easy Game to Learn – Kids love it

A game of Ping Pong packs in everything which kids love – its competitive, fun to play and even has a funny name! It’s a game of young, adult, old and everyone in between.

“The Sport is very easy to pick, isn’t physically demanding at least till beginner level and is almost injury free” Kevin James, founder of PingPongBros – A website dedicated to spreading and promoting the sport.

I couldn’t more to this. It took me just a couple of sessions to get hang of the sport and not embarrass myself before my kids. I play decent now and can play a bit of rally and occasional smashes.

Unlike baseball, football, or basketball, which requires quite a bit of upfront investment in uniform, shoes, and others equipment’s, you would be glad to know Ping Pong is light on your pocket. You just need a basic ping pong table, couple of paddles and few balls to get started.

No special uniform or shoes whatsoever. The game is played on a 9’x5′ game table which is fitted with a net. The paddle is made out of wood and has a grippy rubber on both sides, and the ball weighs about ~2.7gm.

Simple rules to get you started

The game isn’t complex and has easy to follow set of rules. The game can be played by either two players (singles) or four players (doubles).

The game has a simple objective – The player who isn’t successfully able to return the ball loses the point.

Here is a simple video explaining all the basic rules in details:

Broadly the game follows the following set of rules:

Read more about the rules here.

The beauty of the sport is that it is not only easy to learn but also quite engaging. Moreover, Kids can learn about discipline, decision making, and build hand-eye coordination while playing the sport. While adults can enjoy the game and stay fit.

I hope this article could brief you on Ping Pong, its rules and its benefits.

Now, what are you waiting for, go out, and Ping Pong!