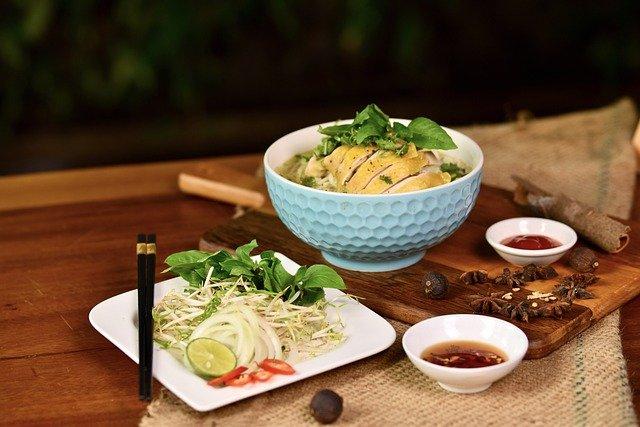 Pho is a warm broth-based Vietnamese soup made with rice noodles, various herbs, spices, and meat (beef, chicken, pork, tofu e.t.c.). Typically consumed during cold weather, this hearty soup is not only delicious but has a number of nutritional benefits.

The fact that most styles or preparation of pho contains meat or tofu (vegan option) makes it a good source of protein which aids in muscle development. A serving of pho can contain up to 30g of protein which can make up half of the daily protein requirements for most people. Pho usually contains spices like ginger, which serves as an antioxidant and an anti-inflammatory. Ginger also helps with nausea, stomach aches,  joint pains and possesses rejuvenating properties. Pho is packed with vitamin A and C. Vitamin A aids vision and proper lung and kidney function while Vitamin C boosts our immune system and improves iron absorption in our bodies.

The slow boiling process of the bone broth used in pho aids the extraction of collagen and minerals like iron, calcium and phosphorus, which are essential for healthy teeth, hair, bones, and nails. The vegetables in pho serve as a healthy dose of fiber which gives the feeling of being full for a longer period of time.

Traditionally prepared pho is made with rice noodles which are gluten-free and low in calories. You can make pho even healthier by opting for a vegetable broth which lowers the calorie count. Pho can also be incorporated into a keto diet by taking out the noodles. However, one important thing to watch out for is sodium, especially in commercially prepared pho. One bowl of pho can pack up to half of our daily requirement for sodium as the soup bases and broths tend to have very high sodium content. Also, while pho is low in calories, the carbs can add up quickly, which isn’t good for you in the long run. You can mitigate this by exercising portion control or making healthier variations of pho at home.

Noodle Texture: Most pho lovers will tell you that this is the easiest way to spot the difference between the two. Northern pho uses wider-shaped rice noodles, while southern pho noodles tend to be thinner.

Toppings: The toppings for northern pho is usually just cilantro and green onions (heavy on the green onions), while southern pho comes with a variety of toppings like lime, bean sprouts, coriander, jalapeno, cilantro, and Thai or Vietnamese basil.

Broth: depending on the type of meat, herbs and spices used, southern pho tends to have a thicker and sweeter broth compared to the northern pho, which is more clear and simple.

As far as pho is concerned, there really isn’t an objectively better pho as both styles can be healthy and delicious. It all boils down to personal preference. Some people prefer the gentle and light flavors of northern pho, while others prefer the bolder flavors of the southern style pho.

The takeaway here is that pho can be a delicious addition to your diet. Both northern style pho and southern style pho contain healthy ingredients that have high nutritional values. However, like all foods, portion control is important, so you don’t end up overindulging.