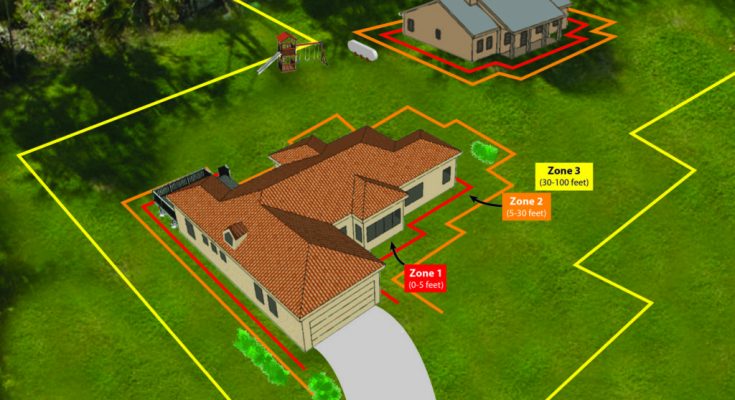 Most people are aware that a wildfire is a fire which typically begins in a forest or in an area of dry vegetation which has been triggered into flames, and which proceeds to burn through an entire region, basically out of control. When the area being burned has a large population of humans or wildlife, everything possible is done to extinguish the fire or manage it.

In some cases where there are no living animals or humans, and the damage would be limited to vegetation, the fire may be left to burn itself out, and provide the natural benefits which accrue following a wildfire. Every year in the United States, there are between 70,000 and 100,000 wildfires triggered by various causes, and several million acres of plant life are consumed in the process.

In the aftermath of a wildfire, new vegetation will eventually spring up, and a process of restoration will gain traction, although that will generally take a number of years.

What causes a wildfire?

The vast majority of wildfires in this country, probably somewhere around 85%, are caused by human actions. Sometimes deliberate acts of arson start these fires, and at other times careless behavior will trigger them. Unattended campfires will often start wildfires, as well as the burning of debris, or even carelessly discarded cigarettes can all be triggers for wildfires. The other 15% of wildfires are usually triggered by lightning or lava. In the past, lightning strikes and lava flows were virtually the only ways that wildfires would start up before the advent of humans.

When a wildfire is started in an area that has been unusually dry, it will generally take very little to start a wildfire and to have it progress through a large body of acreage. Areas that typically receive a lot of rain are less likely to have wildfires triggered, and when they do occur, they are generally not as damaging as dry-area wildfires.

What is a wildfire home ignition zone?

The concept of the home ignition zone was developed after decades of research on how homes and properties were destroyed. A scientist named Jack Cohen coined the term ‘home ignition zone’, after discovering that the behavior of any given wildfire could be influenced by actions you take in your home and in the area surrounding it. Some very simple steps you can take within the home ignition zone can have a very positive effect on preserving your property and limiting the damage of a wildfire.

The home ignition zone consists of an area that includes your home and all the immediate surroundings, and if proper steps are taken, your home can actually survive a wildfire with little or no damage. The steps necessary are simple and can be done by virtually anyone, so if you’re aware of these simple procedures, you have a good chance of saving your home.

Many people have the mistaken notion that a wildfire is much like a lava flow, in that it is an irresistible force which cannot be stopped. This is far from the truth, and you can actually go a long way toward protecting your property by denying a wildfire the conditions it needs to perpetuate itself. The home ignition zone is made up of three zones which are defensible. Zone one includes your home itself and the immediate perimeter of the property.

It is essential that all small materials lying within this zone are removed, so they cannot be touched by fire. This includes all exterior lawn chairs, picnic tables, nearby shrubbery, and virtually anything that can easily be ignited by a wildfire. Mr. Cohen’s research found that the leading edge of a wildfire is rarely hot enough to ignite a house, but embers and sparks flying around can be deadly in terms of igniting smaller objects within zone one. By removing all these smaller objects, you can reduce the likelihood of your house being engulfed in flames significantly.

Zone two is referred to as the firebreak zone, and it is the area that begins just past the immediate area of the home and extends for perhaps 100 yards outward in all directions. In this zone, you should remove all debris, branches and pine needles, and any other material like deadwood which can easily be ignited.

Zone three begins where zone two leaves off, and extends outward for perhaps another 200 yards in all directions. This is considered the third defensible area, where you can influence the behavior of a wildfire by denying it any easily combustible fuel. By ensuring that the home ignition zone is as free as possible of fuel to keep a fire burning, you can have a serious impact on what wildfire will do around your home. With some attention to detail and a little luck, your home could actually survive a wildfire.

In a wildfire risk analysis that was recently prepared, it was discovered that approximately 4.5 million homes in this country are considered to be at high risk of being exposed to a wildfire. Nearly half of these homes have been built in the state of California, which is particularly subject to wildfires every year. Anyone who builds a home or purchase is one in that state or one of several other Western states, should be aware of the potential for wildfires in that specific region.

The 2019 wildfire season had not been as deadly as the previous year overall until several wildfires broke out in October which caused the governor to declare a state of emergency. More than 200,000 people were forced to evacuate areas affected by wildfire, and all the damage caused by wildfires has yet to be compiled.

A fire called the Kincaid Fire began on October 23 in Sonoma County, and consumed more than 76,000 acres of land, including nearly 200 buildings that were completely destroyed, with another 39 severely damaged. There are another 90,000 buildings which are threatened by the wildfire, and may eventually receive at least some damage from the flames.

Another wildfire known as the Getty Fire broke out in Los Angeles on October 28th and was considered to be extremely dangerous, because it was being pushed by Santa Ana winds with gusts up to 80 mph. To date, more than 7,000 homes have been placed under a mandatory evacuation order, because they are in the direct path of this wind-driven wildfire.

In terms of the number of acres burned by wildfires, statistics over the last 40 years indicate that the level of damage has generally increased over that period, although there were some notable years of decrease. For instance, the years where damage was limited to 6 million acres or less were 2008 through 2010, 2013 and 2014, and 2016.

In every other year since 2000, between seven million and 11 million acres have been burned by wildfires.

In some cases, seasonal conditions contributed to larger areas of acreage being consumed, and in other cases, statistics were inflated by one or two particular wildfires which were enormous. In any case, it’s safe to say that both the number of wildfires and the damage wrought by them, has generally increased over the past 40 years, and it seems likely that that trend will continue.

After accomplishing a general clean-up, you can also coat your home and all exterior surfaces with a flame-retardant substance which will further discourage the spread of flames, and provide you with a chance to save the home. Shrubbery can be planted within the home ignition zone which does not promote the spread of fire, for instance, hardwood trees rather than conifers. Low-lying branches can be trimmed up to a height of six feet, so that they cannot be ignited by flames, and have those flames spread to your home.

Consider the three zones of the home ignition zone the areas where you will combat a wildfire by doing everything possible to choke out flames. If you are conscientious about doing this, you’ll have a much greater chance of having your home and property survive the onslaught of a powerful wildfire.