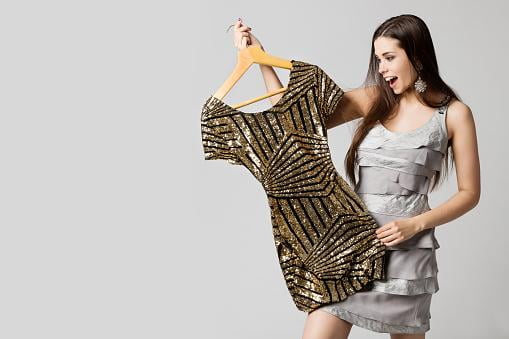 The cocktail dress is a staple in every woman’s wardrobe.  They serve as the quintessential middle point between high-class dining and low-key social hour.  Its versatility is celebrated in a fun, flirty array of colors all the way to the classic ‘little black dress’.  The iconic arrival of the cocktail dress into our closets evolved around 1910 and was in full-swing by the roaring 20s.

Unlike the sentiment which came first, the chicken or the egg, we know what came first in this instance.  Cocktails came before cocktail dresses and cocktails were for the entertainment and leisure time of men, not women.

Prior to 1910, women would adorn themselves in full-length, formal dinner attire, bejeweled and bedazzled to more effectively ornament a man’s arm.  It was not socially acceptable for women to imbibe alcohol in a public setting.  Now, what changed in 1910?

In 1910, the National Woman’s Party was formed and tasked to promote woman’s suffrage.  Women were pushing for the same enjoyment to exercise freedom’s that men had.

As women started to infiltrate politics and social affluence, World War I started sending men overseas in 1914 to protect the homefront.  This left women to manage the homefront.  Women found themselves in positions normally occupied by men which meant women were making their own money.

Advertisers quickly caught on and started targeting women with catalogs and commerce.  Women inspired by new freedoms and wealth fueled the economy, this was empowerment never seen before and it was something women wanted to hang on to, she had earned her right to participate in cocktail hour and needed the perfect attire for celebrating their independence.

The stylish formal cocktail dresses were shorter than the previous elegant gowns but just as sophisticated.  It was a good start, but a new era came to push the cocktail dress forward to carry a personality of its own in a prominent display of rebellion and girl power known as the Prohibition Era.

Prohibition; The Evolution Of The Cocktail Dress

Women were just beginning to come into their own when Prohibition passed in 1918.  The atmosphere was full of young women rebelling against the establishment and speak-easy locations provided the ideal outlet to express their independence – and new attire.

Flappers were the new form of cocktail dresses sporting a daring, independent, dangerous look for women.  These dresses escorted them to private dance halls where women would smoke, drink, gamble, and dance to let off steam.  The flapper, much like today’s cocktail dress was worn during the cocktail hours of 6-8 PM and proved to be versatile by not looking overly casual or too formal, becoming a staple in every woman’s closet throughout America.

Cocktail hour was a way to show independence and style in one fail swoop, with the cocktail dress being the catalyst.

Over the years, the cocktail dress has become a perfect combination of form and function.  The styles may have changed slightly over the years, but the message has not.  The cocktail dress symbolizes the accomplishments that women have been able to achieve and exemplify the fierce independence, strength of conviction, and relentless passion that lives inside us, with a dash of fun and flirty of course.

The next time you attend cocktail hour and slip that dress over your head, remember that you embody more than a simple party dress.  You carry with you the hard-won history that helped place the dress on the rack in your closet.  Wear it proudly and go kick your heels up in celebration.