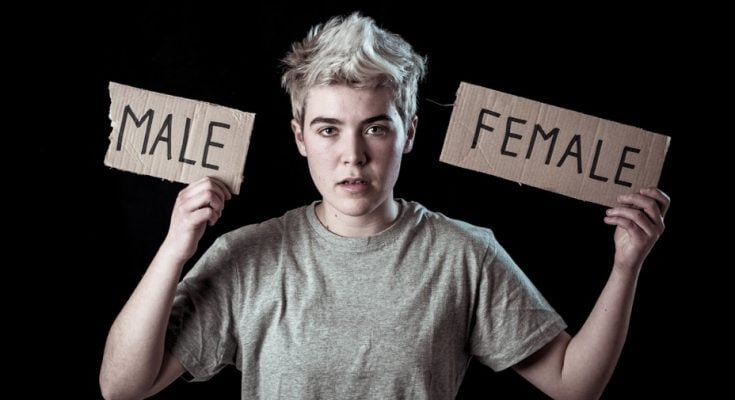 As your child grows up around all types of people and navigates their own gender identity development, here’s how to teach them to be respectful and welcoming.

Between 2006 and 2016, the number of openly transgendered Americans doubled. In recent years, we’ve seen the conversation about pronouns, including “they/them/their” pronouns, grow as more people have come to embrace gender identity over assigned sex.

What does all of this mean and how do we talk to our kids about it? As parents, we want to raise children who are accepting and kind. We also want to make sure that we are supportive and understanding as they explore who they are.

It may seem like there is a lot of terminology surrounding gender identity, expression, and pronouns. When you break it down, it’s pretty easy to understand!

If your kid comes to you with questions about gender identity development, the first thing you should do is explain the difference between assigned sex and gender identity.

Explain to them that we tend to assume that people with female sex organs are girls and vice versa. Then explain that gender identity isn’t defined by a person’s body but rather who a person feels that they are. Tell them that sometimes, our assumptions are wrong.

In other words, assigned sex has to do with the way our body is when we’re born. Gender identity is the gender that makes sense to us, that makes us feel like our true selves. Assigned sex is biological, while gender is not.

It won’t be as hard as you may think to explain gender expression to children. They interact with it every day and implement gender expressive behaviors, themselves.

When you talk to your kid about gender expression, use it as an opportunity to check in with them. Ask them how they think they express their gender. They may say their clothes, their hair, even the toys they like.

Once you have a list of things your kid associates with their own gender expression, talk to them about how those things make them feel. If they express discomfort or unhappiness with any of those things, ask them if other options would make them feel happier or more like themselves.

Because kids tend to mirror the behaviors they see around them, they might not realize that they have other options than the ones they believe are available. Having the space and opportunity to try out different styles of gender expression can be very helpful to their gender identity development!

If a person’s assigned sex does not correspond with their gender identity, they may identify as transgender. Sometimes you will hear this shortened to “trans.”

An important thing to understand about transgender people is that sexual reassignment surgery is not necessary to validate their identity. Remember that gender expression is the way that we show our gender and that can mean different things to different people! The most important thing to instill in your kids from the get-go is to respect a trans person’s preferred pronouns and chosen name.

Whether nonbinary people reject both genders or feel a fluid connection to both, they will most likely prefer “they/them/their” pronouns. Why? Because these pronouns are inherently ungendered!

Kids and even adults have a tendency to ask a lot of questions of people who are different from themselves. Even when you have the best of intentions, you can make people uncomfortable by turning them into a learning tool.

Unless someone invites you to ask them questions about their gender identity, seek out alternative resources. The internet is a wealth of information! You can find tons of articles written by trans and nonbinary people that they willingly wrote and that will provide a lot of insight!

For example, if you’re looking for more resources on nonbinary identities, seek out articles or other works created by nonbinary people. This can help you to answer the question, “What is being nonbinary?” without making the nonbinary people in your life uncomfortable.

A Quick Word About Sexuality

Sexual orientation refers to the gender(s) you are typically attracted to sexually and/or romantically. Your gender identity may determine the word you use to describe your sexual orientation (for example, a trans woman who is attracted to women may identify as a lesbian), but otherwise, they’re not inherently linked!

How to Be Supportive Throughout Gender Identity Development

Teach your kids to always use a person’s chosen names and pronouns. If they’re not sure, it’s okay to respectfully ask! Teach them not to misgender people and to politely correct themselves if they do.

Children are often accepting and quick to adapt when they learn new things. The best thing you can do is give them the tools to accept themselves and others!

For more helpful parenting tips, check out our other posts!