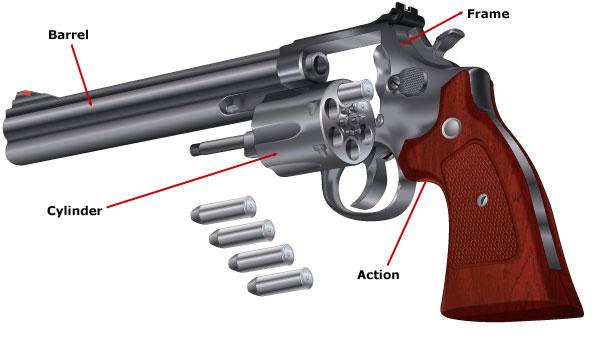 Did you discover an interest in guns? Do you wish to learn more about how guns work? To become a gun enthusiast, you must first learn about the fundamentals behind guns.

Around 30 percent of Americans own at least one gun at home. Though most people buy guns for protection, another market is growing steadily.

In 2018, shooting sports and overall hunting grew by 11 percent. This helped the United States firearms industry in its road to recovery. And if you wish to start a hobby in shooting, you must first know the different parts of a gun.

Continue reading below as we discuss the basics of guns and the parts that make them work.

When talking about guns, it is important to identify the type of gun you are referring to. To better appreciate the different parts that make a gun, you must first understand the types of guns and how they differ from one another.

There are two main types of guns. There are long guns and handguns. Let’s take a closer look at the two below:

Long guns are firearms that feature long barrels. They also come with large-caliber rounds and require a firing position using the shoulder as an anchor.

There are different kinds of guns that fall under the long gun category. These include your rifles and shotguns. You can subdivide rifles into other categories. There are bolt-action rifles, lever-action rifles, and semi-automatic rifles.

Bolt action rifles are the simplest among all rifles. It works by pushing a bolt forward before pulling the trigger.

Thereafter, you pull back the bolt, which releases the used cartridge.

Meanwhile, lever-action rifles work by pulling a lever to load a bullet. You will then pull the trigger to fire then pull the lever anew to empty the cartridge and reload any cartridge.

As for semi-automatic rifles, everything takes place automatically. Every pull of the trigger releases a bullet. But this time, you don’t need to pull any lever to load a new round.

The gun does it automatically.

When it comes to shotguns, they come with large barrels. The barrels accommodate the large burst of lead pellets or small steel. When you pull the trigger, it fires the pellets in a narrow, cone-shaped pattern.

This disperses the shot, which is effective in hitting fleeing game animals.

Opposite to long guns, handguns come with shorter barrels and have a smaller caliber. You can fire them with either one or two hands though the latter results in better control and stability.

There are two basic kinds of handguns: the revolver and the pistol. A revolver is the more iconic, becoming a staple in old cowboy films.

The original revolvers can store up to seven bullets. These bullets store in a revolving cylinder, hence the name of the gun.

On the other hand, pistols feature cartridges that come in the form of magazines. Unlike revolvers, most pistols carry a bullet capacity that is more than double the revolver.

The Different Parts Of A Gun (Revolver)

As a newbie, you want to start small and simple. Thus, we will focus on the parts that make up a handgun. First, let’s take a look at the different parts of a revolver and their respective functions.

The grip is the part where your hand meets the gun. This is the portion where you hold the firearm for pointing and shooting.

As the revolver evolved through the years, so did the grip. Today, you can find revolvers that feature ergonomically-designed grips. This gives you additional comfort and guidance in proper hand placement.

Using both hands provides more stability and increases your accuracy, especially when you’re firing while moving.

The trigger is the part that you press with your finger to initiate the firing motion. Some modern-day pistols come with a Double-Action trigger. This allows the cocking and striking of the hammer to happen all in a single action.

The trigger guard keeps you from accidentally pulling the trigger when drawing your gun. This is a ring-shaped metal part that surrounds the trigger lever.

If the trigger is the part that initiates the firing sequence, it is the hammer that is the first to take action. Upon pulling the trigger, the hammer comes into contact with the gun’s firing pin. The pin then goes into the cartridge primer, causing the latter to ignite.

This ignition creates a chemical reaction that propels that bullet.

Most handgun designs feature visible hammers. In the old revolvers, users must manually cock the hammer back to its original position before squeezing the trigger.

The cylinder is the part that holds the revolver’s cartridges. It features multiple chambers that align with the barrel during the firing sequence. It is also the part that you see revolving around a central axis.

The barrel also comes with some key elements, namely, the muzzle, the breech, and the bore. The muzzle is the front-end portion of the barrel. This serves as the bullet’s exit point.

One the other hand, the breech is the back portion of the barrel. This is the part that is closest to the revolver’s firing mechanism.

As for the bore, it is the interior portion of the barrel. The bore’s diameter is also the caliber. This determines the caliber of the bullet the revolver can accommodate.

The main difference between a pistol and a revolver is that the former comes with only one chamber that is integral to its barrel. Modern pistols feature some revolver parts. These include the grip, hammer, barrel, trigger, and trigger guard.

But it also comes with its own exclusive parts. Let’s check them out below:

This is the part that holds several cartridges in place until you are ready to prep them for firing. Some magazines are detachable while others are integral to the pistol.

Some pistol owners call this the “magwell.” Its function is to lock the magazine into place. In turn, it allows the cartridges to feed seamlessly into the gun’s chamber.

This lever is the part that keeps the gun’s bolt, slide, and barrel in place. It is a wing of metal that normally attaches to a pin. It also facilitates the disassembling of the pistol.

The slide is the part that moves back and forth during the firing cycle. It is also the metal assembly that houses the pistol’s upper section. Since the slide moves during the firing sequence, it can withstand significant amounts of force.

Meanwhile, the slide stop locks the slide back into place after firing the last cartridge.

As the name implies, this is the part where all the “action” happens. It features all the moving parts that work together in the loading, unloading, and firing processes. It also covers the discharging of an empty case.

This is where the used brass casings exit. You will find this along the middle part of the slide. You may also use the ejection port to check the firing chamber’s condition. This is useful when a misfire or misfeed occurs.

It’s important to note that other parts of a gun are very small. In rifles, for example, there are washers, buffers, and gas rings. But no matter how small they may seem, you cannot take them for granted.

And if you need to replace any of them, going for reputable brands like JP Enterprise is important.

As a beginner, you need to practice gun safety rules. Always assume that every gun you hold has ammo. You can only say otherwise if you personally verify it. Thus, perform a safety check immediately after holding the firearm.

Another is to always point the gun in a safe direction. You will only point it at something that you are willing to shoot.

Moreover, keep your finger off the trigger. You will only touch the trigger once you are already on target.

Lastly, you need to be certain of your target. The same thing goes for your line of fire and what’s behind your target.

Also, don’t forget to get a case or a safe to store your gun, to make sure it doesn’t fall into the wrong hands.

Learning about the different parts of a gun is vital in proper gun use. Knowing the key parts and their purpose improves your technique. It also helps you take care of your firearms better.

But there are many other aspects you need to learn. We invite you to check our different blog posts on firearms. We also provide tips that will help you become a more responsible gun owner.