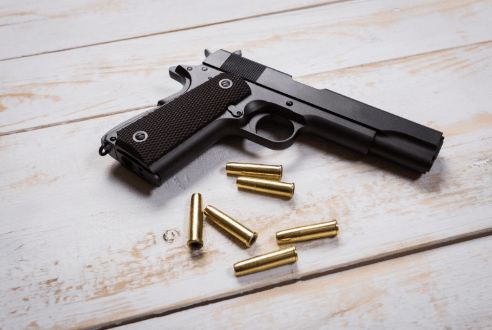 One-third of Americans own a gun and 72 percent have shot a gun at some point in their lives. If you are considering joining this cohort, you may have some questions about the differences between different kinds of guns.

Comparing shotgun vs rifle vs handgun can get confusing for newcomers but there are some clear differences between these different kinds of guns. They each have their own unique histories and use cases.

In this guide, we’re going to break through the jargon and help you understand more about each of these guns. You’ll know which kind you want to buy first and when you should use it.

Lock and load, read on, and find out more!

What Is a Handgun?

A handgun is, put simply, a compact gun that you can fire with one hand. Long guns like rifles and shotguns, require you to prop the gun against your shoulder for accurate firing.

The most common form of a handgun is the pistol. Think of revolvers and semi-automatics like Glocks and Colt M1911s.

The defining features of a handgun are:

The barrels on a handgun, while shorter than on rifles and shotguns, are rifled. This means that they spin the bullet as it is fired which increases accuracy.

Pistols will almost always fire bullets rather than shot. There are a few notable exceptions like the Taurus Judge and S&W Governor that can both fire .410 shotgun shells. Usually, you will be firing small-caliber bullets such as 9mm and .38 special rounds.

There are two main types of pistols: revolvers and semi-automatics. Revolvers feature a cylinder that rotates to bring the next bullet up to the muzzle: they’re reliable but have limited capacity. Semi-automatics use the pressure of a fired round to eject the cartridge and load the next round which gives them a higher fire rate.

History of the Handgun

The handgun dates back to the 1300s when pistols were known as weapons across Europe. Firearms from this period were unreliable and slow to load, which meant that contemporaries eschewed them in favor of bows and crossbows.

The first revolver was created in 1835 and pistols have only gotten better since. Technological innovations like double-action revolvers, semi-automatic pistols, and latterly, fully-automatic pistols, have made handguns into one of the most popular varieties of guns in the world today.

So when should you use a handgun? When it comes to self-defense, the handgun reigns supreme. If you want a firearm that’s easy to conceal, doesn’t weigh too much, and has good stopping power, a handgun is the top option for you.

One area where it doesn’t shine is long-range shooting. It depends on the round but most pistols are only accurate to 100 yards. The shorter barrel makes for less-accurate shooting in general.

If using one for home defense, be cautious. Pistol rounds have good penetrating power which means a bullet can go clean through a wall. Always exercise caution when shooting at an intruder in your home and be mindful of what’s behind your target.

What Is a Shotgun?

A shotgun is quite different from a handgun: they are long guns, with barrels that usually exceed 18 inches. While you can get shorter shotguns, they require a background check and extra tax. These are known as sawn-off shotguns and are generally illegal.

As a long gun, a shotgun requires you to put it to your shoulder and fire it with both hands. Shotguns can have pistol grips that make firing from the hip more comfortable but by and large, you will want to aim down the sights. This means bringing it to your shoulder.

Despite being long guns, shotguns are mostly smoothbore. This means that the manufacturer hasn’t rifled the barrel. This improves the accuracy of its shots.

When using a shotgun you can mix your load. For instance, you can include birdshot, buckshot, and slugs in your shotgun. Most shotguns will hold around 5 shells which, while not as large a capacity as a pistol, is a lot of firepower.

Shotguns are usually pump-action or semi-automatic, which means you can fire multiple shots before you need to reload. Some older shotguns and double-barrel shotguns are break-action. This means you can only fire the shells in the chamber before breaking it open and reloading.

History of the Shotgun

Guns that fire shot date back to the 1600s and were originally used for hunting birds. One famous example of a gun that fires shot is the blunderbuss. These have flared barrels and were used in the 18th century.

The shotgun gained fame and notoriety in the First World War where it was used to devastating effect by US soldiers to clear German trenches. Its tight cloud of shot yielded great results in the narrow trenches of Flanders.

Despite being a very old form of firearm, it is still used across the world today.

So, when should you use a shotgun? One of the best use cases for a shotgun is for hunting. Birdshot and buckshot both work wonders on their respective prey and are deadly at short range.

Shotguns are also fantastic for home defense. Depending on their load, they offer access to devastating force at close range.

Shotgun pellets also have limited penetrating force that means while you must still be careful when shooting indoors, they are less likely to kill a loved one.

What Is a Rifle?

A rifle is the ne plus ultra of long-range firearms. It is a long gun that requires you to put it to your shoulder. It has a long, rifled barrel that ensures accurate shots, especially if the shooter is using optics.

Rifles fire larger caliber bullets than pistols. They are usually semi-automatic but bolt-action rifles can still be used to great effect when hunting.

One of the most popular styles of rifles in the USA is the AR-15, the civilian version of the M16 rifle. While originally chambered in 5.56, the AR-15 can be found in a variety of calibers in guns like the JP GMR-15 Ready Rifle.

Rifle calibers vary wildly between .22 long-rifle rounds that are great for novice shooters to huge calibers like .50 BMG. If you are learning to shoot a rifle, stick to smaller calibers or your accuracy will be terrible.

While it’s easy to assume that assault rifles are the same thing as machine guns, that’s not usually the case. Most legally-owned assault rifles fire as semi-automatics, with one round firing when you pull the trigger. Fully-automatic rifles in civilian hands are rare.

History of the Rifle

In early modern history, the most common form of firearm was the arquebus. This gun evolved into the musket, a smoothbore firearm that fired a large ball-shaped projectile.

In the Napoleonic era, rifles began to become more common. Specialist rifle regiments were equipped with early rifles like the British Baker rifle. These regiments were renowned as crack shots and the rifle’s much-improved accuracy was revolutionary for the time.

The American Civil War was one of the first major wars that were fought with rifles rather than muskets. This is also said to have increased the psychological toll that war wrought on soldiers due to having to pick out individual targets. Muskets required simply firing into a crowd due to the lack of accuracy.

Since then, rifles have developed into the semi-automatic machines we see today.

When to Use a Rifle

The best use of a rifle is for hunting. Their long-range accuracy, particularly when combined with optics, makes it easy to get clean kills when hunting deer or other larger prey.

It’s a terrible idea to use a rifle as a home defense weapon. Rifle bullets have a tremendous amount of kinetic energy and will tear through walls, even if they hit a target. This means it’s easy for the bullet to hit someone you care about.

Pistol vs Shotgun vs Rifle: Which One Is For You?

When comparing pistol vs rifle and shotgun vs rifle, it’s easy to see the differences. Yet which style of gun is best for you?

If you are looking for a concealed-carry self-defense weapon, we would highly recommend a pistol. If you are interested in a home defense weapon, a shotgun will beat the other two every time. If you want to hunt, a rifle will be the best option for you.

We hope you’ve enjoyed this article comparing pistol vs shotgun vs rifle.