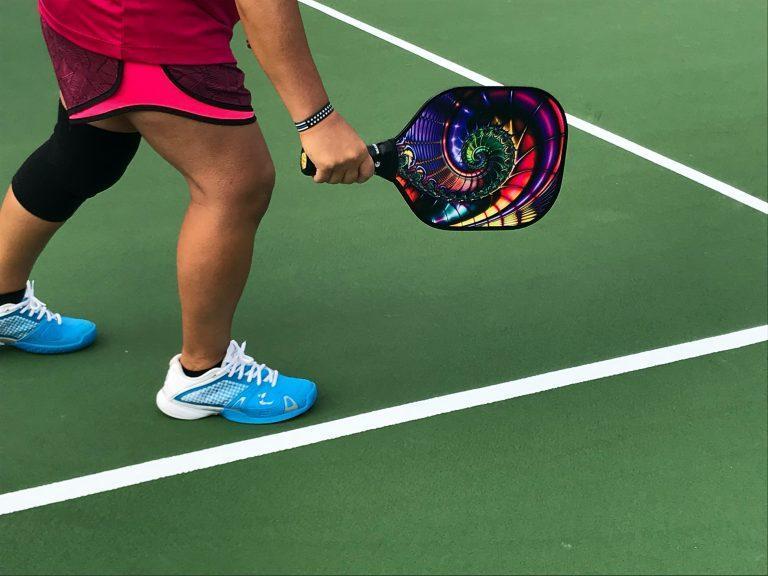 Are you familiar with Pickleball? If not, try not to worry. You’re in good company. The game is yet to truly catch fire in the UK, though it remains popular across the pond in the US and Canada.

The truth is, however, Pickleball is steadily increasing in popularity. Courts designed especially for the game are cropping up all over the country, with an increasing number of players getting involved.

If you’re keen to join the Pickleball revolution, let’s take a look into what the game entails – and what you’ll need to become a Pickleball player.

Pickleball is a paddle-based sport, best considered a combination of ping pong, badminton and tennis. It is played on a court comparable that a badminton venue, with players (playing solo or as a doubles teams) batting a ball over the net using handheld paddles.

The game was invented in 1965. Joel Pritchard and Bill Bell were Washington natives that returned from a round of golf to find their respective families bored on the grounds of Pritchard’s home. While a badminton court was on the property, nobody could find racquets or a shuttlecock to start a game.

The families improvised, batting a ping pong ball over the net with paddles. The rules in mind were similar to badminton. The ball was never to touch the ground, with each player relying upon volley returns. When they realised the ball bounced well on the court, the net was lowered, rules were amended and specialist equipment created. The sport of Pickleball was born.

Pickleball became a sensation in the United States, largely thanks to Pritchard and Bell’s insistence that anybody, regardless of age or physical fitness, could play the game. Now, Pickleball courts can be found in all fifty American states. Pickleball is particular popular with seniors that find the physical exertions of tennis, badminton or squash challenging.

What are the Rules of Pickleball?

A Pickleball court is shaped like a tennis court. The game begins with an underarm serve, which is played to the player standing in the opposite corner of the court.

As with most racquet sports, points in Pickleball are assigned by forcing an opponent into a fault. Examples of these include:

Victory in a game of Pickleball is achieved when a player scores 11 points and has a clear two-point advantage over an opponent. For example, a score of 11 to 9 ends the game. A score of 11 to 10 will not. The game must continue until the lead is stretched to two points.

What Do I Need to Play Pickleball?

The great beauty of Pickleball is that, in theory, anybody can play. It doesn’t matter if you’re carrying an old sporting injury, struggling with arthritis or are too young to usually get involved in sporting endeavours.

All the same, you’ll need particular apparatus if you have any serious Pickleball aspirations. The most important is appropriate footwear. The Sized has a guide to recommended Pickleball shoes, which minimizes the risk of slips, falls and muscular tears.

You’ll also need to ensure that you have an appropriate ball and set of paddles. You can make a ball yourself if necessary, but an official Pickleball sphere will be perforated with holes.

You’ll be able to find Pickleball equipment online, or at most major sporting shops. You may need to seek out more niche departments, but with perseverance you’ll find what you’re looking for. Look for a paddle that wraps around the hand to reduce the risk of dropping it.

Finally, you’ll obviously need a court. As discussed previously, Pickleball courts can be found throughout the UK. If improvisation is necessary, lower the net of badminton or indoor tennis court to 34 inches. Just ensure the surface beneath your feet is solid enough to allow the ball to bounce.

OK, One Last Question – What’s with the Name?

A popular legend is that Pickleball was named after the Pritchard family dog, Pickles. Rumour has it that Pickles would chase the ball while the game was in process, running off with it and ceasing play.

That’s a cute story, but alas, the opposite is true. Pickles was born in 1967 and was named after the game, not vice versa.

The name ‘Pickleball’ was actually coined by Pritchard’s wife, Joan. She commented on how the makeshift nature of the game reminded her of a Pickle Boat – the term for a boat crewed by unchosen oarsmen from other vessels.