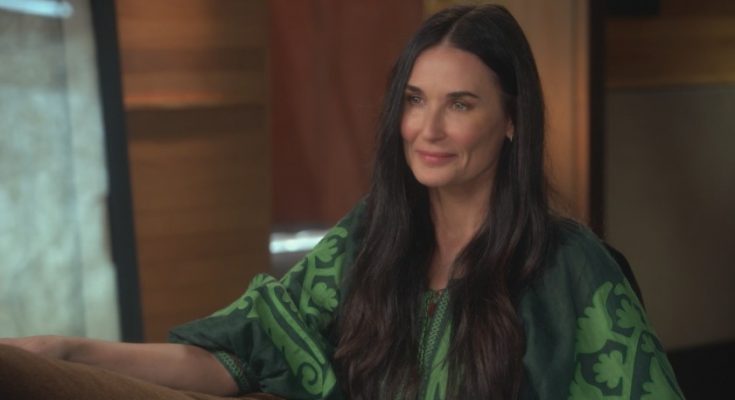 On Tuesday Demi Moore dropped a memoir in which she revealed shocking details about her life and relationship with Ashton Kutcher. She spoke about sexual assault, her sobriety and a lot more.

Now, everyone is expecting a reaction from Ashton and his wife Mila Kunis.

Promoting her new memoir, “Inside Out,” Demi prompted a media tour where she opened up about her turbulent years with ex-husband Ashton Kutcher. Tabloids carefully followed the relationship between Demi and Ashton mostly because of their stark age difference. The ex-couple had a 15 year age difference.

In the book, Moore explains: “I think that I had been responsible for so much of my life, and all of a sudden this window opened up where I was safe.” But, as Lost Angeles Times reports, the book also does a lot of finger-pointing, blaming Kutcher for encouraging the couple to have threesomes and break Demi’s sobriety, while he allegedly cheated.

Demi Moore said that she talked with Ashton Kutcher before the book’s release, although the actor seemed unhappy about it.

So much fun last night at @livetalksla talking about #InsideOutBook with @amandadecadenet. I loved meeting all of you. See you tonight SF!

So, technically we did get a reaction from him, or so it seems.

But, How Does Mila Kunis Feel All Of This?

On the other hand, Mila Kunis is still quiet on the matter. Sources close to the actress shared that she’s been trying to ignore everything about it. “Mila doesn’t want to talk about what is in the book and anything else that might be revealed. She doesn’t want Family Guy to bring it up in any jokes, she wants to wash herself clean from anything Demi” one source told HollywoodLife. Yet, another source shares that Mila already knew everything.

Mila Kunis and Ashton Kutcher met on the set of “That 70’s Show.” Mila even shared that her first kiss ever was with Ashton Kutcher onscreen. But, the couple made it clear that that’s not where the magic happened. It took them 14 years to take their relationship from friends to something more. At the beginning of 2012, Ashton and Mila hooked up and became inseparable since then. They married in 2015 and have two kids.

It seems like the couple is still going as strong as ever, and it’s not bothered by Demi’s shocking revelations.

People believe that the new post, Ashton shared on his Instagram account, is a reaction from both, Kunis and Kutcher. Apparently, that 70’s Show- stars headed to Disneyland and they are having the time of their life.

Magical weekend @disneyland An imagination tinderbox. That Walt guy had a vision.

You can see them smiling and gushing over each other, while Mila is rocking her new blonde look. The actor captioned the photo “magical weekend @disneyland”.

Whether you’re siding with Dami or Kutcher right now, it doesn’t matter because it seems like he and his wife Kunis are not bothered by it.