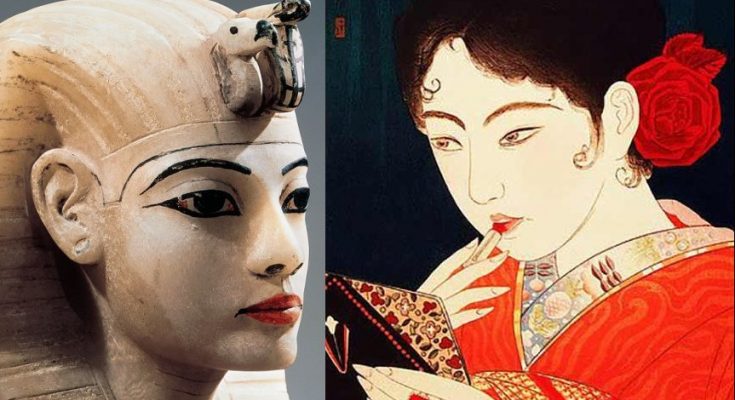 Research shows that lipstick was first utilized by ancient Sumerian women and men. It is unclear whether not the Sumerians invented lipstick but scientists believe that they did wear it. Gemstones crushed into tiny fragments were utilized to decorate the eyes and lips of the Sumerian people. It was believed that lipstick was eye-appealing and sexually alluring. Below, you will discover more about the history of lipstick.

Cleopatra was known for her lavish lifestyle. Cleopatra was seen as one of the most beautiful and exotic women in ancient Egypt. She caught the eye of Julius Caesar and soon after they become lovers. She was also believed to have a long love affair with Marc Antony. Ancient Egyptians created a strange concoction that was utilized to decorate the lips, making them look sexier and fuller. The concoction consisted of insects that were crushed into tiny particles. The insects are what gave the lipstick it’s bold red coloring. Lipstick was utilized by ancient Egyptians to represent social status. Only the rich and famous could afford such amenities.

It is also believed that the ancient Indus Valley Civilization decorated their lips with lipstick. The concoction utilized consisted of bevel-ended, rectangular pieces of earth pigment known as ochre. YSL lip products in vibrant shades are highly sought after in the United States, Europe, India, and Canada.

In modern times, lipstick is utilized by almost all women. The cosmetic is very affordable and available in a broad range of colors. While some women prefer neutral colors, others prefer bright, bold colors. Lipstick is also utilized with lip liner to give the lips fullness. Modern manufacturers utilize oil, pigment, and oils, such as cocoa butter, castor, mineral, jojoba, and petroleum, to make their lipsticks. All of these products provide fullness, moisture, and sexiness that many women find desirable.

There is no denying that time was once different. Heck, there was once a time when dating was only acceptable if you were dating the opposite sex. Luckily, this is no longer the case at all, as now it is acceptable for same-sex couples to get married. And, a lot of this has to do with pioneer and rebels like Queen Elizabeth. During her time period, lipstick was frowned upon by the church. Not only do they not approve of it, but they didn’t want anyone near it. Despite this fact, Queen Elizabeth was a huge proponent for the lipstick, especially the red shades. She loved them and truly believed that they contained magical powers. It has been said throughout history that she made her lipsticks with poisonous white lead and red dye. It is even believed that this contributed to her eventual death.