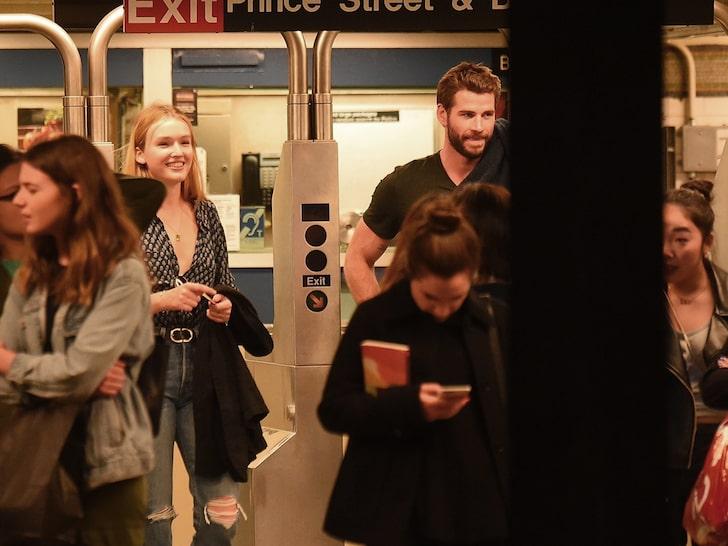 It seems like we can’t get enough of the drama between Miley Cyrus and Liam Hemsworth. Just as we got used to the idea that Miley is now with Cody Simpson and the media moved on, Liam decided to show he’s moving on too. So, we’re back in the drama. Everybody wants to know who is she. And, of course, we’re all at the edge at how Miley is going to take the news.

On Thursday, TMZ caught Liam in NYC’s West Village neighborhood holding hands with a mystery woman. The two enjoyed a meal and some drinks together at Sant Ambroeus and also hold hands later while walking the streets.

This is definitely a more subtle way of letting us know he’s moving on than how Miley did it – twice.

The “The Last Song” stars are separated for no more than two months. Since then, Cyrus, 26, dated “The Hills: New Beginnings” star Kaitlynn Carter for about a month. After which she moved on to the Australian crooner Cody Simpson.

The romance between Miley and Kaitlynn went public just two days after she separated with Liam. Rumors started circling that Hemsworth was quite affected by Miley’s behavior, but the only thing we officially got from him was his Instagram photo.

“Just a quick note to say that Miley and I have recently separated and I wish her nothing but health and happiness going forward. This is a private matter and I have not made, nor will I be making, any comments to any journalists or media outlets. Any reported quotes attributed to me are false. Peace and Love,” the actor wrote.

Until now he was laying low, keeping things private. But, with the latest public “hand-holding”, we guess, Liam is ready to show the world he’s moving on.

The question that most interests us. TMZ once again proved nothing can be hidden from them.

It me, wearing linen 🙂

Just a few hours ago, at 6:06 AM PT, TMZ updated the story, revealing “the girl strolling the streets with Liam is Australian actress Maddison Brown … a star on the CW show “Dynasty.”

We know Miley has a type, but that’s true for Liam as well. He fell for another hot blonde who, according to some fans, looks like Miley. We’ll agree there are similarities, but it’s definitely not a total look-alike.

Maddison Brown is 22 years old Australian actress known for her role on Dynasty with over 452,000 followers on Instagram. She’s been acting and modeling since she was a kid. However, she wants to have an acting career more than a modeling one. In an interview from 2014, Brown said: “I see myself as an actor, I did it before I did modeling. I felt like it was always something I wanted to do. Acting is more challenging. It’s easier to say I’m better at modeling but the process is different. The preparation for acting is insane. With modeling, you just do castings and stand there and leave. Acting is such an emotional investment. I hope I’m good at both. Modeling is a less emotional effort.”