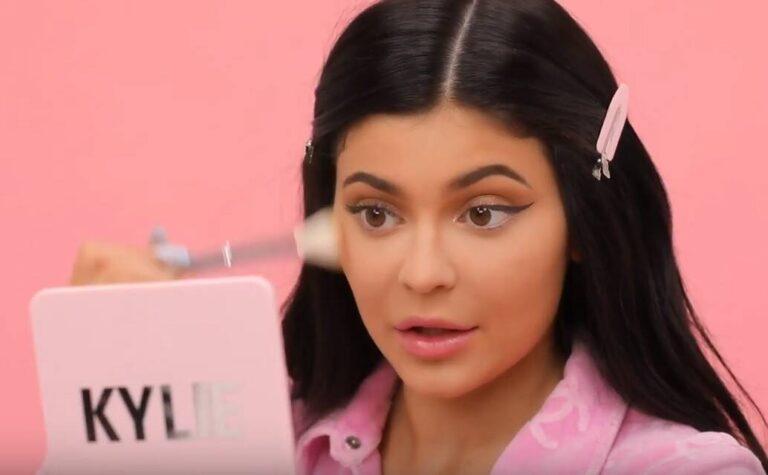 We all know that Kylie loves makeup. That’s no secret since the 22-years-old star founded her own cosmetic company starting with the infamous lip glosses. They made Kylie a billionaire.

So, can we really say we’re surprised when Jenner said her 20-month-old daughter is into makeup? We guess not, but people are not all open to the idea of a one and a half-year-old child wearing makeup.

Fortunately, Kylie is also aware of this. Although she said her daughter loves makeup, she hasn’t decided when will she allow Stormi to wear makeup.

In a new Youtube video, the Kylie Cosmetics mogul, 22, opened up about her everyday makeup routine since becoming a mom and her daughter’s interests.

“I’m always learning new things so my makeup routine is definitely changing. Also, since becoming a mom it has gone from taking me 30 minutes to do my makeup to now having to do my makeup in 10 minutes,” Kylie says in her makeup tutorial.

“I’ve had to cut my routine down a lot, so this routine will probably take me a little longer now because I’ll be explaining you guys every step of the way, but this routine takes me no longer than 10 minutes,” she adds.

After this, the star mentioned her daughter.

“Stormi is actually super into makeup right now. It’s amazing,” Jenner remarked, adding that just like her mother, Stormi is all about lipstick.

“Every time I’m wearing lipstick she notices. She looks at me and says, ‘lip lip lip,’ ” the proud mom added.

But, Kylie also remarked that she hasn’t thought about letting her daughter wear makeup.

“Naturally, I haven’t even thought about what, when I’m gonna let Stormi wear makeup. I don’t know, I’m just gonna see. She might even not wanna wear makeup. I mean, honestly, but how things are going through like this girl is obssesed with makeup. She begs me at this point.”

But, Stormi is not the only younger from the Kardashian-Jenner clan that trying makeup for the first time.

In September, Kim Kardashian West revealed that she got in trouble with her husband Kanye West for letting their 6-year-old daughter wear lipstick and eyeshadow.

Kim told E News that she would let her daughter wear lipstick. “I’d let her wear, you know, she has a little red for Christmas, I’d let her wear a red lip, or I’d let her do one pop of something. I’d let her if she’s wearing a black dress, a black lip.” However, Kanye didn’t like that. “I think he had it, he changed all the rules,” Kim said.

However, The Keeping Up With the Kardashians star also revealed that sister Kylie Jenner would give North some of her Kylie Cosmetic Lip Kits.