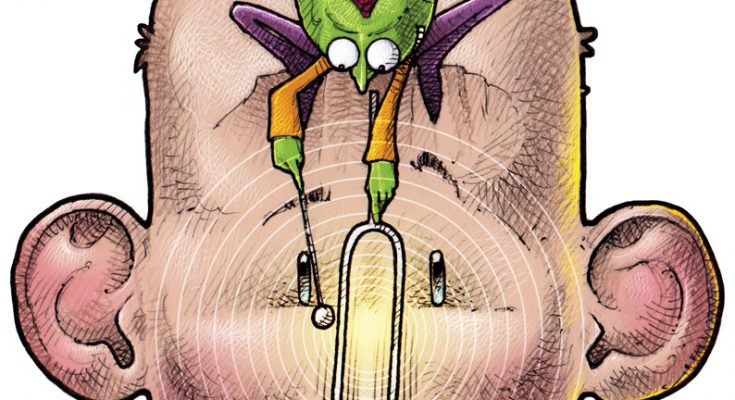 Over the past few decades, tinnitus retraining therapy has become increasingly popular across the United States and elsewhere around the world. This specific form of therapy, which was first introduced in the early 1990s, has helped many people find relief from this very annoying—even debilitating—symptom.

Tinnitus is a very common hearing symptom that causes people to hear consistent buzzing, ringing, or rattling noises, even when there are no external sources of sounds present. Tinnitus can be connected to many different underlying causes, including physical damage to the ear, various diseases, age-related hearing loss, and many others.

Tinnitus affects between 15 and 20 percent of the adult population. Because this condition is so common, there has been an ongoing push to find the best (and longest-lasting) tinnitus treatment options. Hearing aids and maskers have long been used to treat tinnitus, but tinnitus retraining therapy (TRT) generally seeks to provide deeper solutions.

Many people wonder whether tinnitus retraining therapy is actually effective. While the therapy remains a relatively new practice, there have already been several studies suggesting that it is one of the best methods for treating tinnitus. In this article, we will take a look at what these studies have shown about tinnitus retraining therapy and also discuss the most important things to know about TRT, in general.

What is Tinnitus Retraining Therapy?

Tinnitus Retraining Therapy (TRT) is a comprehensive form of tinnitus treatment that helps prepare people to both consciously and unconsciously cope with their tinnitus. According to Sound Relief, one of the nation’s leading tinnitus treatment centers, “Tinnitus Retraining Therapy uses sound therapy and directive counseling over 12-24 months to properly deal the three systems involved: the auditory system (hearing), the limbic system (emotions), and the autonomic nervous system (flight or fight response).”

Sound therapy, which uses maskers, “pink noise” machines, and other comparable devices, helps people develop the capacity to effectively ignore or block out the ringing and buzzing that comes with tinnitus. Directive counseling can help people address the emotional complications caused by tinnitus including depression, anxiety, sleep disorders, and various others. Your audiologists may also suggest possible health changes and complementary treatment options that can make tinnitus even more manageable. The experts claim that TRT can help more than 80 percent of people experiencing tinnitus which, according to the studies mentioned below, is a claim supported by clinical research.

A study conducted published by Laryngoscope Investigative Otolaryngology and cited by the National Institute for Health was conducted to “compare treatment outcomes for chronic bothersome tinnitus after Tinnitus Retraining Therapy (TRT) versus standard of care treatment (SC) to determine the longevity of the effect over an 18-month period.” In other words, this study was conducted to see if TRT was more effective than ordinary tinnitus treatment options.

The study tracked 39 adults over the course of 6 months, 12 months, and 18-month timeframes, following the various types of tinnitus treatment. Ultimately, the study concluded, “Significant improvement in tinnitus impact occurred after both TRT and SC therapy, with a larger treatment effect obtained in the TRT group.” This suggests that while traditional tinnitus treatments can be effective, TRT is a measurably superior treatment option. As the time frames grow larger, so did the differences between each group.

The study followed 57 individuals between the ages of 21 and 78 and was conducted between 2015 and 2016. Overall, the results of the study demonstrated that tinnitus retraining therapy is very effective. The abstract cites, “After completion of therapy tinnitus completely disappeared in 34 (59.65 percent) patients. Improvement in tinnitus perception was observed in total of 49 (85.96 percent) of patients.” In total, only 8 (about 14 percent) of patients did not see improvements. In conclusion, tinnitus retraining therapy is one of the most effective methods for addressing the very common symptom of tinnitus.

Those involved in the audiology industry are consistently looking for new ways to improve the way we diagnose, address, and ultimately treat tinnitus. Currently, there are many different tinnitus treatment options available. However, as the studies above suggest, tinnitus retraining therapy is likely the best tinnitus treatment option that is currently available. This comprehensive form of treatment addresses every component of tinnitus, including the effects on the auditory system, the emotional components, and all others.

Finding the Right Hearing Treatment Center for You

Tinnitus Retraining Therapy can be most effectively administered by a licensed audiologist. Audiologists, as you might expect, often work at hearing centers. When comparing different hearing centers, be sure to choose one that offers tinnitus retraining therapy. This will maximize the probability of improving your ability to hear and will also increase your ability to manage your tinnitus.

The best hearing centers will also offer personalized hearing treatments, including assistance with hearing aids and various other solutions. Choosing an independent hearing center (rather than a hearing center sponsored by a hearing aid company) will increase the objectivity of the treatment you receive and will help ensure you are hearing at your very best.

In conclusion, while there could always be more research completed on the topic, tinnitus retraining therapy has been proven to consistently work. It is among the best options available at most hearing centers and has helped countless people across the world.