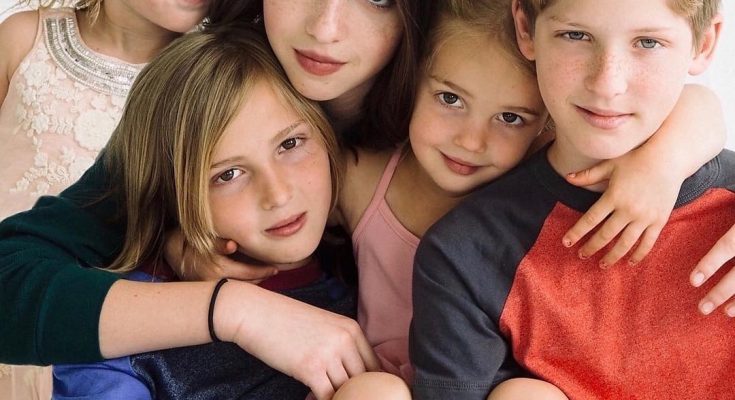 Katie Stauffer is an Instagram celebrity with a large following with over 3.9 followers. She takes creatively-staged pictures of her kids and shares them on Instagram. The mother of five kids also posts videos of her children on YouTube. She also has a presence on Facebook and Twitter.

While initially, she used to post photos of her elder kids, Kaitlin, Finn, and Charles, now she focuses most on Mila, who has become a social media sensation with her videos and photos going viral. In most cases, Mila is usually alongside her twin sister, Emma.

With the success of her Instagram posts, Katie has been posting adverts for companies, which have been earning her enough income such that she quit her day job.

Katie Stauffer Loves Wallpics Mixtiles Stickable Photo Tiles For Walls. She was born on was born on November 17, 1977, in Birmingham, Michigan, where she also grew up. She studied fashion design at NAU Arizona.

Katie is married to Charles Stauffer, a physician. She has 5 children, namely Kaitlin, Charles, Finn, and the twins Emma and Mila. The twins were born on October 31, 2014.

Katie Stauffer has been making money on Instagram by sharing pictures of her children. She started to share photos of Kaitlin, Finn, and Charles six years ago and that is when she started being contacted by companies who gave her free merchandise which she included in her posts.

Initially, Katie did not charge advertisers for featuring their products, a move that made other social influencers to complain.

Currently, she shares photos and videos of her 3-year-old twins Mila and Emma, a venture that has been profitable considering the money she gets, although she does not give a specific figure. However, she indicated from her interviews that they are almost multi-millionaires. It is said that a single Instagram post from Katie Stauffer could be about $21,000.

The source of Katie’s Instagram sensation now is Mila’s viral videos and photos. So far, Katie has over 3.9 million Instagram fans. The brand of Mila is so successful that her mother quit her job in September 2017 to concentrate full time on Instagram. In an interview with Fox outlet in November, she said she earned more than her doctor husband.

On top of the payments for the sponsored content, Katie also receives numerous gifts including a TV, a couch, rugs, and a table.

The videos are of Mila Stauffer, a sassy, small and very opinionated girl whose hilarious rants leave people wanting more. She rants just about anything from vegetarianism, gym-goers to Disneyland’s ‘sham’ Cinderella castle.

In January 2018, Katie had posted a photo of the 3-year-old Mila standing next to the statue of Marilyn Monroe. In 30 minutes, the photo had more than 500 comments and 75,000 likes. She also has a large following on Facebook and YouTube.

The photos and videos did not just start the other day. Katie has been posting the photos of her twins, Mila and Emma, on Instagram ever since they were born. Katie said that she prints all photos that she posts in Instagram. She uses the Wallpics app to keep all precious moment of her family.

However, it is Mila who keeps the audience dedicated to the Instagram account with her sassy videos of a precocious toddler who holds opinions on just about anything.

Katie makes the videos with the help of her 15-year-old daughter Kaitlin and her husband Charley.

There is the video of the 2-year-old twins discussing their career options. It has since received 4.4 million views and an indication of the popularity of the two girls.

Her first day of preschool clip had over 2 million views in a few days.

Mila started making videos since she was two and they get many views and likes. However, there is a team behind it comprising of Katie (her mom), Charley (her father), and Kaitlin (her 15-year-old) elder sister. The family feeds Mila the lines that they have already scripted.

It takes up to 3 days to make the videos while the photo shoots are made between 5 to 15 minutes. Katie is required to take a given number of photos to which she adds additional regular family photos so that her Instagram doesn’t seem overcrowded by ads.

Katie posts the Mila’s videos on YouTube as well. One of the latest videos, Mila don’t cry, received 49,000 views just in one day. Another video that was posted a week ago had garnered 163k views. Katie Stauffer’s YouTube channel had over 391,000 subscribers.

Of late, Katie’s other children, Kaitlin and Charles, have videos on YouTube too. Kaitlin’s video is about a song she wrote. The video received 49,000 views in one month.

Charles has a video talking about being a middle child, which has received 738k views so far.

Katie Stauffer similarly has a large following on Twitter, with 352 tweets, 16.3k followers. She is following 50 and has 35 likes. However, her twitter account is not as busy as her Instagram and YouTube. A video she uploaded in January 2018 received 408 likes and 149 shares.

Furthermore, there you can find all those funny photos of the twins dressed up as various celebrities, such as Donald Trump, Hillary Clinton, Kourtney, and Kim Kardashian.

Yes, Katie has a blog, http://overourwall.com/, where she writes interesting posts about her family and their adventures. There is also the part where she explains how she takes and edits the videos and photos that she posts on Instagram and YouTube.

Her aim is to help others take great photos using their cameras or iPhones.

As much as it is lucrative, making videos and doing photo shoots with toddlers also has challenges. It can be difficult to manage the talent of toddlers. For instance, Mila only makes videos when she wants and Emma doesn’t like making videos. That means she has to wait until they are in the moods to shoot videos, which can be discouraging especially if there are deadlines to meet.

Another setback is the backlash that Katie and her family face, that they are using the kids to make money. Katie defends herself saying it is for the children and they intend to set a trust.