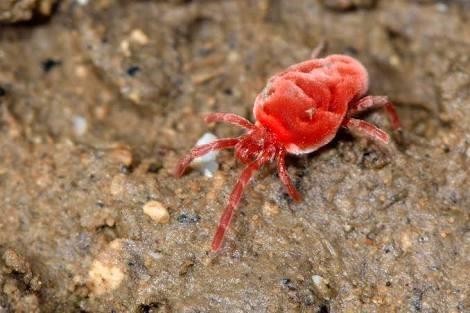 Contrary to what one might think, clover mites are not insects, they are, in reality, another type of creatures called mites which are therefore difficult to spot since they are very small. It is the damage they do that is more remarkable. This is why, once identified, we must try to eradicate them while doing prevention. In this article, we will talk about how to get rid of clover mites and how to recognize them and fight them.

Clover mites are similar to spiders and have 8 legs. They can be red but not only: the colors green, brown, orange and yellow are also part of their wardrobe. They mainly attack indoor plants and plants in greenhouses. In the garden, their attacks are less frequent and especially less serious, but vegetables, flowers, shrubs and fruit trees are their favorite targets and they attack them relentlessly.

What they like is a dry atmosphere, which can be quite common in the interior of our homes and verandas, especially in winter. Besides, the heat accelerates their proliferation since the eggs laid daily (less than 10) will incubate in just a few days, before hatching quicker.

A plant that dries up because its sap is sucked by the parasites characterizes an attack of clover mites. There are a few steps before arriving at the death of the plant however, and that is where you intervene to get rid of clover mites.

Take a closer look at the underside of the leaves of your plant as this is where they are most active. If you are not sure of the presence of these pests, put a white cloth under the pot and gently shake the leaves, so you can easily spot the mites once they have fallen.

Clover mites proliferate and attack plants when the air is rather warm and dry.

They are often found outdoors where plants are abundant. Not only this, but they seem to multiply greatly in humid and warm areas where temperature is always above 20 °.

In addition, clover mites are not insects and the abuse of insecticides allows their development. By killing their predators, you are giving them the opportunity to grow.

Clover mites’ primary food is the sap of plants and they tend to suck it out which causes the death of the plants.

Able to multiply very quickly, their attack can be heavy if they are not taken out in time.

In addition, they are able to move from one plant to another, allowing them to infect a multitude of plants if one of them is affected.

If see the first signs of a clover mites attack on your plants, you change immediately change the plants’ place, especially you have two or three adjacent to each other’s. All these procedures can help you get rid of clover mites quickly.

First of all, as clover mites particularly appreciate dry atmospheres, mist your indoor plants or water them outside, showering the foliage. Then keep the pot on a bed of gravel that you will keep moist. Clover mites will not be attracted to an atmosphere that is too humid for them. In the outdoor garden, generously water the leaves of the plants.

Do not bring nitrogen fertilizer especially to the vegetables garden, as this will make the leaves tenderer and sweeter, becoming even more tempting for the clover mites.Do not use insecticides because, on the one hand, they are harmful to the environment, and on the other hand, they also eradicate all insects likely to feed on clover mites: if they no longer have a predator, they will multiply even more! Especially since they are becoming more and more resistant to these chemicals.

As we mentioned, red spiders like when the air is dry enough to develop.

In order to get rid of clover mites, spray non-calcareous water regularly on the foliage to create a humid environment conducive to make them disappear.

If the clover mites often causes limited damage, watch your plants regularly, especially in hot weather and dry weather, as this is where they reproduce the fastest.

If the presence of clover mites in the garden or in the house persists, many treatments can be carried out:

As we have mentioned ealier, you can spray a decoction of horsetail or nettle manure.As with the ladybug with aphids, you can introduce Phytoselulus persimillis, a small predatory mite that feeds on the clover mites at all stages of its development.It is sometimes advisable to spray mineral oil on the infested plant, however do not expect miracles with this type of remedy.On the other hand, rosemary essential oil diluted in water and sprayed on the plant seems more effective. A decoction of garlic (30 g / liter of water) diluted to 30% and sprayed on the plant will also give good results. To prevent the eggs from hatching and devouring the plant, repeat the spraying every 3 days to a fortnight.Do not forget to cut the leaves damaged by clover mites: throw them or burn them but do not put them on the compost.

We hope we have shed some light on how to get rid of clover mites and finally helped you keep your plants healthy.