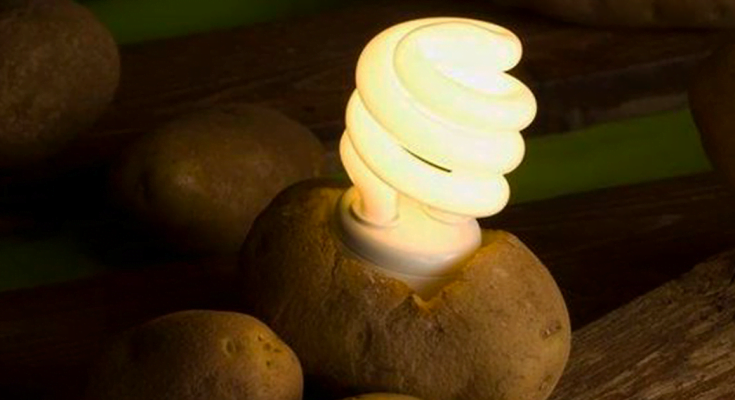 If somehow you experience a blackout in your neighborhood the only thing you need is to turn the potatoes into powerful battery.

The only thing I know about the potatoes is that they have essential vitamins, but are full of carbs. I love them, but somehow, I found a way to avoid them as much as possible.

The full-carb diet is not working well for me.

Now, Haim Rabinowitch doesn’t think so. He is a professor of science and agriculture working at the Hebrew University of Jerusalem. This professor has a team of scientists behind him that help him find discoveries like this.

Their last update was transforming the potato into a powerful battery.

According to the results of the study, a potato can produce power after you boil it for eight minutes.

“It can produce ten times more power than that amount.”

The discovery is simple. The potato is not a source of energy by itself. However, if you attach two metal plates to it, the chemical reaction will allow the energy to be released.

So, don’t eat eight-minutes boiled potato and metal together.

The full, powerful battery kit contains a potato, two metal electrodes, and alligator clips. Using this kit, Rabinowitch showed how a potato could provide enough energy to light up LED powered lighting for as long as 40 days.

Watch the video bellow and see the potato put some work.

I’m thinking about the future and how we are going to use the natural sources for providing energy.

READ NEXT: These 26 Amazing Storage Inventions Will Make Your Life Really Simple