Nubra is one of the most visited valleys in Ladakh and is known for its beauty, especially the sand dunes, the snow-capped mountains and its distinctive charm. Nubra is also referred to as Ldumra or the “valley of flowers”. Nubra valley, located to the north of Ladakh, is situated between the Karakoram and Ladakh ranges of the Himalayas. Nubra along with Sham Valley is the only place which has a warmer climate than the rest of Leh district. Also, due to its fertile soil, the vegetation in this area is thicker than other parts of Ladakh.

Other than its natural beauty, Nubra valley is famous for Turtuk which is the last village on the India-Pakistan border, and Siachen Glacier, one of the highest battlefields in the world.

Tourists need an inner line permit issued by the district administration to enter Nubra valley. Application for the permit can be done from Leh town. Any reliable travel agency in Leh can help you with the application and the permit can usually be obtained in one working day. 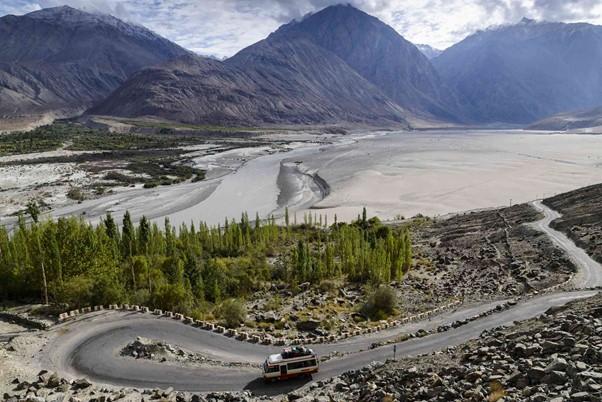 The first part of the journey to Nubra valley starts at Leh and after passing through the snaking road making its way through the mountain pass culminates at Khardung La. Officially, Khardung La, situated at 5,359 metres and which was until recently the highest motorable road in the world, is the gateway to Nubra valley. Due to its height and low oxygen in the air, it is often advised not to step out from the car for more than 10 minutes. Medical facilities are available at the Army camp in Khardung La.

The second part of the journey starts from Khardung La to Hunder via Diskit, which is the administrative headquarter of Nubra. Although, there is nothing much of interest for tourists in Diskit, don’t forget to visit the Diskit Gompa which is the oldest and the largest monastery in Nubra. The Diskit Gompa belonging to the Gelugpa (Yellow Hat) sect was founded by Changzem Tserab Zangpo who was a disciple of Tsongkhapa, the founder of the Gelugpa sect, in the 14th century. The major attraction of the gompa is the 32-metre high statue of Maitreya or the Future Buddha that was consecrated by the Dalai Lama in 2010.

Hunder is surrounded by sand on one side, mountains on the other and river on the third side. Majority of the hotels, guest houses and camps in Nubra valley are located in Hunder.

The next destination on the Nubra valley tour is Panamik which is famous for its hot springs. Located at an elevation of 10,442 ft above the sea, Panamik is almost 150km far from Leh. The spring water at Panamik is said to contain a high percentage of sulphur and is used for curing rheumatic-related diseases. It is also close to the Siachen glacier.

Next on the list of Turtuk, which as mentioned earlier is the last village on the India-Pakistan border. Turtuk was opened for tourists in 2010. Turtuk, said to be the only Balti region under the Indian government, was controlled by Pakistan until 1971. After the 1971 war between India and Pakistan, Turtuk officially became a part of India. The people of Turtuk speak Balti, an ethnic group of Tibetan origin, along with Urdu and Ladakhi languages. The apricots from Turtuk is said to be one of the finest qualities in Ladakh. Turtuk and Bogdang are Muslim-dominated villages in Nubra. The residents of Turtuk are known for their warm nature and hospitality.

Siachen Glacier is undoubtedly the highest battleground in the world. Situated at an altitude of above 18,000ft and spread over more than 70km, Siachen is one of the toughest battlefields as the temperature drops below -60 Degrees. Braving the extreme cold, avalanches and various ailments such as frostbites, the Indian Army takes pride in serving at Siachen Glacier. In 2019, the Indian Government decided to open Siachen Glacier for tourists. Tourism is allowed from the Siachen base camp to Kumar Post located at an elevation of more than 15,000 ft.

Photo by Rohan Reddy on Unsplash