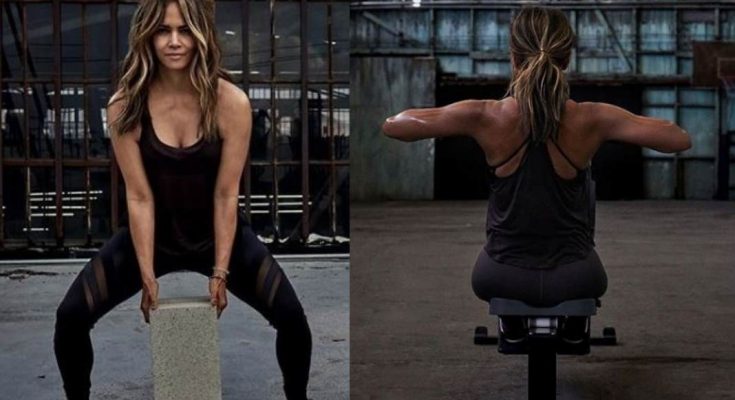 Staying well-hydrated and drinking eight glasses of water daily is really important. Apparently, Halle Berry is a firm believer in this rule. The actress posted a wet t-shirt photo on her Instagram, alongside with hydration tips.

Halle Berry is 53 years old, yet her physique is so incredible it makes the actress look half her age. And, there’s a good reason why this is. Halle Berry is taking her active lifestyle seriously. She exercises and eats healthy.

So, it’s not surprising when she decided, earlier today, to share a photo of herself, promoting hydration. According to the caption of the photo, the actress wanted to share some helpful tips for water consumption to celebrate #FitnessFriday.

That being the case, Halle Berry posted a photo of herself in a sports t-shirt where you can see her pouring water down the chest. In the description, she wrote: “Today’s #FitnessFriday is about one of the most important factors of any fitness routine – HYDRATION. We are made of 60% water, and replenishing that amount can have life-changing effects on the bodyweight loss, higher energy levels, better cardiovascular health, and younger-looking skin. The crazy part? When you’re thirsty, you’re already dehydrated – it’s said that we need upwards of 64 oz. of water a day to stay hydrated and that’s NOT including if we’ve worked out. So I challenge all of us today to drink at least 8 x 8oz. glasses of water a day, EVERYDAY, until next week. I would love to keep track of everyone’s progress, so let me know how it’s going in the comments of this post! LETS DO THIS 💦💦 – Happy Fitness Friday!”

This is not the first time Halle shares a photo with the hashtag #FitnessFriday. The actress spends a lot of time in the gym and she advocates for an active lifestyle.  It’s quite understandable considering how she looks. When you think of Halle Berry the most popular and iconic image of her coming to mind is the orange bikini in Die Another Day. In the scene, Berry put to shame past Bond girls and made history.

Age is just a number.

Now, the John Wick: Chapter 3 – Parabellum actress is proving that age is just a number. To celebrate her 53d birthday Halle Berry posted an insanely hot photo in a wet t-shirt that read “No bra club”. She proved how mothers and women of all ages can look like total bombshells.

And, most impressively of all is the fact that we probably are yet to see Halle Berry in her fittest form. She’s training for a new movie where she’ll play an MMA fighter. The actress told InStyle: “Right now I’m training for a film called Bruised, where I play this disgraced MMA fighter who has to make her way back to the top for the sake of her son,” she explained. “It’s also my directorial début. My second act. I’ve had so many movies that didn’t turn out the way I thought they would. You realize that as the dancing bear, you have zero power. But no matter how this movie turns out, good or bad, I dared to take the risk to do it. That’s what matters.”

We’re excited to see what this amazing woman has stored for us.