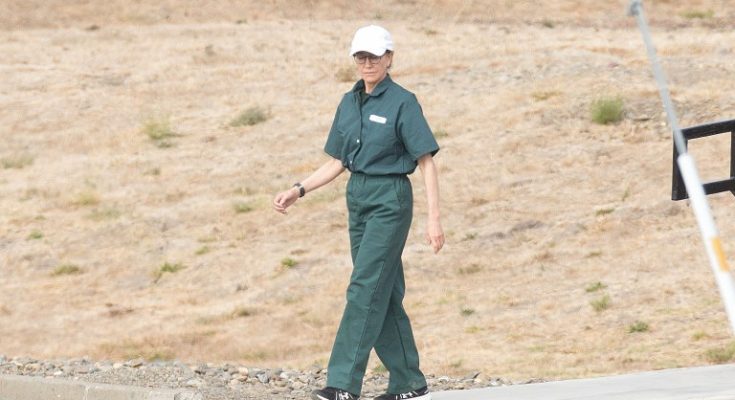 Her friends and family might know her as Felicity Kendall Huffman, but to us, she’ll always be Lynette Scavo. The hard-working mom and ambitious carrier woman. I mean how can we not. Huffman won an Emmy Award for her work on Desperate Housewives (Outstanding Lead Actress in a Comedy Series) in 2005. Things were going good for her until the recent college admission scandal.

The full story saw the daylight when Felicity pled guilty in a college bribery case. The “Desperate Housewife” actress pleaded guilty to mail fraud and honest services fraud in May. She admitted paying college admissions counselor William Rick Singer to correct her daughter’s wrong answers on her SAT exam. This move increased Sophia Grace’s score 400 points above her PSAT score.

Last Thursday, Huffman, 56, surrendered to the authorities to begin her 14-day sentence. According to Entertainment Tonight, will only be spending 13 days in custody at the Federal Correctional Institution in Dublin, California. Her projected release date is Oct. 27. Huffman received credit for one day of jail time, to account for the time she spent in custody when she was originally arrested on March 12.

The full sentence of the actress is 14 days behind bars, one year of supervised release, a $30,000 fine and 250 hours of community service working one-on-one with children — for her role in the college admissions scandal.

Felicity received this sentence after she admitted to paying $15,000 to help her 19-year-old daughter, Sophia, get into an elite college by cheating on the SAT.

One week in prison.

After the sentencing, Huffman issued a statement.

“I accept the court’s decision today without reservation,” the statement read. “… I have admitted that and I pleaded guilty to this crime. There are no excuses or justifications for my actions. Period. ”

The actress also publicly apologized to her family saying: “I would like to apologize again to my daughter, my husband, my family and the educational community for my actions. And I especially want to apologize to the students who work hard every day to get into college, and to their parents who make tremendous sacrifices supporting their children.”

About a week ago the actress began her sentence.

Today, ET reports that “Felicity is doing really well and she’s holding up”.  According to a source who spoke with ET, her family went to see her and everything went smoothly.

“The visits went nicely,” the source says. “They spent a lot of time together. They sat in the visitors’ room for a few hours and spoke.”

The source also revealed that her mother in a dark green prison jumpsuit was “hard for Georgia.”

Besides,  the source adds: “Her mother’s in prison garb — it’s very difficult. This is not to be taken lightly. It’s federal prison. This is not ‘club fed’ — it’s just not. It’s not like the articles on online.”