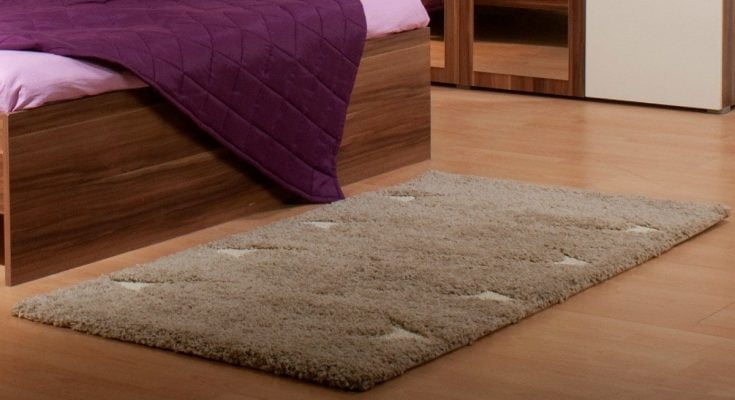 You’ve probably got a throw rug lying around the lounge or living area. It’ll be seen wrapped around shoulders on movie nights, or laid out for the kids to lie on early on a weekend morning while watching cartoons.

But much like cushions, throw rugs aren’t just strictly practical things. When not in use, they don’t need to be scrunched up in a corner somewhere, or just draped over the back of the couch. With a little thought, that same throw rug can be used to completely reimagine the look of a room with almost no effort.

Throw rugs are great for a variety of styles; they’re just at home in a super casual setting as in a more formal one.

Simply drape the throw over the back of a couch to immediately add colour, then layer with cushions. With casual styling, you don’t need to make sure that the throw is nice and neat; embrace wrinkles! The throw will complement the styling in the lounge area without looking like you’ve spent time on it.

A simple half-fold in the throw and then setting it over the arm of a couch is also a neat way to use the rug. Again, the idea is to not be too clean and precise; let it hang, let one side be longer. Layer with cushions, or even layer the throw over the cushions to create an effortless look.

For couch-based throws, we’d recommend something like the Avery Cotton Throw from our throw rug range. They come in a variety of colours to suit your existing palette.

Bedrooms can also be immediately livened up with a casual throw rug. Too lazy to make your bed properly? A throw can quickly cover up the bed to make it much more presentable, without requiring a lot of effort. It’ll look particularly inviting when you get home after a long day to collapse into bed.

The wonderful thing about throw rugs is that they can go from casual to formal quite easily. Rather than casually draping the throw over the back of a couch, neatly align it in a diamond shape across the back. Layer with cushions.

Or, neatly fold the throw and set it on the couch or a chair; it will help create a square of colour and interest in the room, while still being available to use.

More important for the more formal styling is the choice of colour. Use neutral colours to complement a layout, or add a bright splash of colour to create visual interest in the space.

In the bedroom, a Meridian Chunky Throw over crisp smooth bedsheets or a doona cover can create immediate texture and interest to the room. Lay the throw across the whole bed, or neatly fold it into a rectangle to place along the foot of the bed to suit.

Couches, ottomans, and chairs all wear down over time — how could they not, when they’re used so often?

Rather than fix every little thing that comes up, don’t be afraid to cover it with a throw. If the arm of the couch is getting a little worn, why replace it? Drape the throw over in a casual style when not in use.

Have a favourite ottoman coming apart at the seams? Fold the throw and place it over the ottoman to create a nice centrepiece in the living room.

Decorate a Wall or Door

Something people don’t often think of is to decorate a wall or door with a throw rug. When not in use, hang the rug on a hook to create a simple splash of colour and texture to an otherwise blank wall. It also helps keep your living space neat and tidy when it’s not in use.

Dylan acrylic throws look particularly nice when hung from a hook with their tassels, and come in many colours to fit your home.

Throw rugs are comfortable, versatile items that no home should be without. With a throw, you can add colour, texture and style to a room effortlessly. Mix and match throws, or swap them out on occasion to quickly redesign a space.