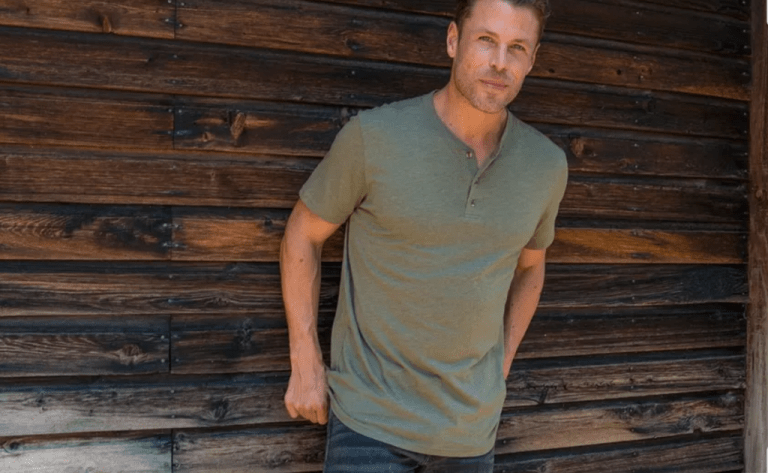 While t-shirts are the ultimate male wardrobe piece, many guys like to remain on the safe side and generally wear only crewnecks.

So, what about other styles, especially the widely popular long and short sleeve Henley?

These tees had a boost in popularity in the 2010s when they were beloved by Hollywood celebrities, famous athletes, and regular guys.

That’s great, but many ask themselves a question more than years later – are Henely t-shirts still in style today? We investigate.

Henley is a collarless t-shirt with a button placket going down the neck and collarbone for those who need a quick refresher. The plack usually has 3-4 buttons, and the t-shirt is mostly made from soft fabric such as Pima cotton, various cotton blends, cashmere, etc.

Like any other tee, a Henley started as an undergarment and was worm pretty much by every laborer during the Industrial Revolution.

Because of the new cotton gin and water-powered milling technology, it was possible to make large amounts of fabrics and tees to provide for the growing number of workers.

By the mid 19th century, Henley left the confines of a laborer’s garment and crossed to the sports world as athletes recognized the comforts and practicality of the tee.

The name? It comes from one of the largest rowing races in England held in Henley-on-Thames town. A rower’s team wore this tee as a uniform, and the rest is history!

For a long time, Henley continued being both an undershirt and athletic garment. However, in the 1970s, it was finally noticed by the fashion world.

It would be fair to call fashion designer Ralph Lauren the Henley godfather who recognized the potential and introduced it to wide audiences. He himself loved wearing Henleys during his time off and inspired many men to trust his judgment.

Soon after, Henleys started appearing in more clothing shops, and by the late 90s, they were a staple for every guy. This tee was heavily featured in TV and movies, which helped its popularity.

The peak was reached by the 2010s when every guy from Idris Elba to your local barista had a Henley.

Okay, but what about 2022? It’s been over a decade since hot Hollywood studs started gracing magazine covers wearing a Henley.

Well, don’t hurry to write the Henley off because it’s become an undeniable member of the men’s wardrobe Hall of Fame, and it’s absolutely in style in 2022!

Why are Henleys in style?

If you need some convincing (though you shouldn’t), we have three reasons why Henleys are in style and why you need one or two in your closet.

Henleys are soft and stretchy, the neckline helps the body breathe even on a hot summer’s day, and the entire fit allows freedom of movement. That’s a pretty big deal in our book.

They flatter the body

Henley hugs your figure just right, highlighting everything from your chest to shoulders to hands. It’s generally a little tighter than any other tees, so perfect when you want to show off. That’s why we spend hours at the gym, right?

They show you’re not boring

Yes, a crewneck or V-neck look good and have their place in your weekly rotation. However, wearing a Henley once in a while shows you’re not boring and are willing to take your fashion choices into your own hands.

The neckline, the buttons, and the fit look stylish and elevate any outfit!

Make sure you get high-quality tees on colors that will make sure you look stylish and feel comfortable.

Read Next: How to Style Different Types of Pants This Spring (mamabee.com)