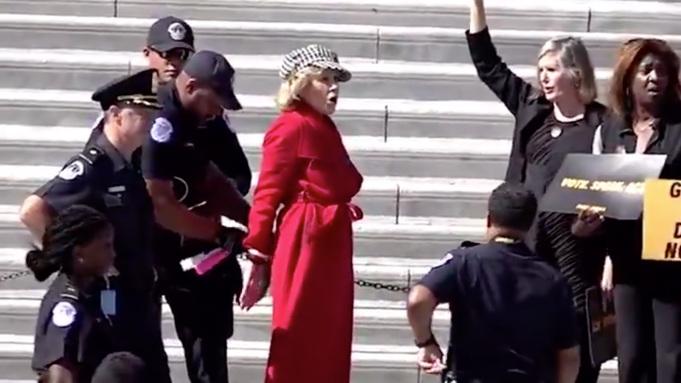 Every day, the voices fighting for climate change are getting louder. More and more celebrities are joining the movement and making their contribution. Among them is Jane Fonda, who had just announced she’s moving to Washington DC to be “closer to the epicenter of the fight for our climate”.

Another big name, you must have heard of by now is Leonardo DiCaprio. The guy has a foundation (The Leonardo DiCaprio Foundation) dedicated to preserving the environment and stopping climate change. And, while he raises awareness through documentaries and supporting organizations, Jane Fonda took her activism to the streets.

So, it doesn’t come as a surprise when Jane Fonda said she’s very inspired by Greta Turberg and she wants to do something. In a recent interview with Los Angeles Times, Fonda opened up about why she’s moving to Washington DC.

After coming to Washington DC, the actress launched a “Fire Drill Fridays” campaign calling for a civil disobedience effort to raise awareness of environmental challenges.

This Friday, while protesting on Capitol Hill, the actress was hauled in by police. According to Mike Valerio, a WUSA9 reporter, he spotted Jane Fonda protesting among a dozen other people in a checkered newsboy cap and red coat. The police arrested her on the steps of the Capitol Building.

The reporter even shared a video on Twitter saying: ” @Janefonda is HERE on Capitol Hill… Planning to be arrested while protesting climate change political paralysis. She tells us she’ll be here *every* Friday into 2020 — demonstrate, get arrested, [email protected] #ClimateChange #breaking #FireDrillFriday”

Planning to be arrested while protesting climate change political paralysis.

She tells us she’ll be here *every* Friday into 2020 — demonstrate, get arrested, repeat.@WUSA9 #ClimateChange #breaking #FireDrillFriday pic.twitter.com/4bvV4qVmxg

Will Fonda really keep her promise?

The actress told the Washington Post on Thursday: “I’m going to take my body, which is kind of famous and popular right now because of the [television] series and I’m going to go to D.C. and I’m going to have a rally every Friday.”

If everything goes as planned, we should expect 13 more arrests for Jane in the next couple of months.