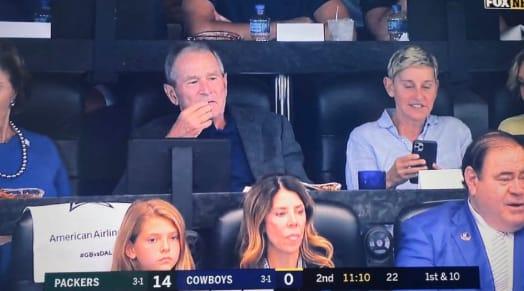 We all know and love Ellen DeGeneres. She is vocal about the LQBTQ rights, children’s rights, animal rights, and on her show she’s been more than generous with her fans. In 2015, she was named the 50th most powerful woman in the world by Forbes. Ellen has more than 76 million followers of Twitter, and more than 50 million on Instagram, so it’s safe to say – she has influence.

This is why, when Ellen was seen sitting next to George W. Bush at the Cowboys game over the weekend, people started to lose their minds. Many expressed strong negative feelings toward the encounter.

The former president had conservative politics that were anti-LGBTQ and people criticize him from the countless deaths from the wars in Iraq and Afghanistan that happened during his term. It came as a shock to see Ellen with him.

After the outrage and high media coverage of the story for the last few days, Ellen decided to respond.

On Oct 8, she tweeted: “Yes, that was me at the Cowboys game with George W. Bush over the weekend. Here’s the whole story.” The tweet came with a video from her show that airs on Tuesday.

Yes, that was me at the Cowboys game with George W. Bush over the weekend. Here’s the whole story. pic.twitter.com/AYiwY5gTIS

In the video Ellen said she was invited to the game by Charlotte Jones, daughter of Cowboys owner Jerry Jones, joking that she and de Rossi attended as they “wanted to keep up with the Joneses.” Then, she became more serious and continued saying: “When we were invited I knew that we would be surrounded by people of very different views and beliefs.”

DeGeneres acknowledged the backlash saying: “people were upset: ‘Why is a gay Hollywood liberal sitting next to a conservative president?’ A lot of people were mad.” After this, she added: “Here’s the thing: I’m friends with George Bush, in fact, I’m friends with a lot of people who don’t share the same beliefs that I have. We are all different and I think we’ve forgotten that that’s OK that we’re all different.”

She believed this would calm things down, but after it, Twitter exploded and a lot of celebrities had something to say.

David Cross tweeted: “It was neither, “shut down”, nor was it “powerful”. It was weak, self-serving, dissmive and eye-opening,” while Susan Sarandon said: “But missing the point entirely, DeGeneres framed the issue as simply a matter of her hanging out with someone with different opinions, not a man repeatedly accused of being a war criminal.”

Mark wasn’t interested in Ellen’s friendship message and instead, he tweeted: “Sorry, until George W. Bush is brought to justice for the crimes of the Iraq War, (including American-lead torture, Iraqi deaths & displacement, and the deep scars—emotional & otherwise—inflicted on our military that served his folly), we can’t even begin to talk about kindness.”