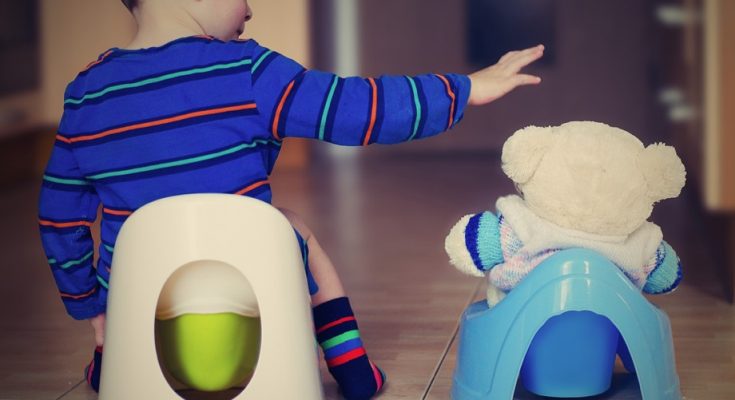 Potty training is nothing if not a funny time in a parent’s life. These potty training funny stories will resonate with anyone who has been through it.

Any parent who’s been through the potty training struggle can tell you what a wild ride it is. Teaching a kiddo to use the potty is often extremely frustrating. But it can also be extremely hilarious.

Looking for some potty training funny stories to get you through the struggle? Here are some of the best ones parents shared that let you know you’re not in this alone.

1. A Little Confused About What to Flush

Using the potty requires kids to remember a lot of things. Like where the potty is, that they need to wipe their bottoms, that toilet paper gets flushed not thrown on the floor, and so much more.

So, it’s no wonder that some kids get a little confused about what goes where and what happens when.

One parent told CafeMom that their son flushed his underwear down the toilet with the toilet paper! As you can imagine, the underwear caused the toilet to clog.

They were down one pair of undies and the money they had to pay the plumber. Not a great day in that house, for sure. They definitely could have used some bathroom safety tips!

One common theme in potty training funny stories is that kids will go literally anywhere before they learn to go on the potty. And sometimes, when they decide to go wherever, they also decide to play in the puddle, much to their parents’ horror.

She said that he whipped off his diaper, climbed to the top of his baby slide, and then proceeded to pee right down the slide. To make matters worse, he then decided to slide down his pee covered slide. She joked that he had made “his own water slide.”

If you’ve ever tried to sell your house, you know that it’s a really stressful experience, especially when you have kids. The house needs to be clean all the time for showings. And the realtor can call up wanting to drop by for a showing at any time!

This stress plus the stress of having a potty training toddler is a recipe for perfect disaster. One mom told PopSugar about her disastrous potty training/house showing incident.

She was home with the kids when her realtor called and said she had a couple that was really interested, and they were in the neighborhood. The mom said they could drop by, but that she and her kids didn’t have time to leave. So, they’d be there for the showing.

As she rushed around trying to tidy up, her potty training son announced he needed to poop. And, of course, minutes after he sat on the potty the doorbell rang.

While she was greeting the realtor and the potential buyers, her son came downstairs. He announced proudly that he’d pooped on the potty. Then he held out both hands, each full of his own poop, to show her he’d really done it.

She said the realtor and the potential buyers rushed out so fast she barely had a chance to apologize. And no, they did not buy the house.

4. A Tale of Pooping Ingenuity

For a lot of kids, potty training is the ultimate was to exert control over their parents and their own bodies. This can create quite the power struggle, which often leads to frustrating and hilarious situations.

One mother told Today’s Parent about her daughter’s clever workaround to pooping on the potty.

She said that her daughter was peeing on the potty regularly, but refused to poop on the potty. Instead, her daughter would hold her poops in until she knew she’d have a diaper on – at nap or overnight. As a result, they were dealing with some seriously messy diapers when she woke up.

This mom decided to stop the power struggle by putting her daughter in underwear for nap times. She’d leave the potty in her room so she could poop whenever she needed to during nap-time.

The first day she tried this, a few minutes into nap-time, her daughter announced that she’d pooped. But when this mom checked the potty, it was empty. Horrified, she began to search the room for the poop, but couldn’t find it.

Finally, she checked her daughter’s pants and discovered that her daughter had put on her own diaper just so she could poop in it instead of using the potty.

Potty training a toddler is a lot like house training a pet. That is to say, you’re going to end up with some pee and poop on the floor. There’s just no avoiding it.

Some kids seem to really enjoy peeing on the floor. And unfortunately some enjoy playing in it too.

One mom told Metro UK that her son peed on the hardwood floors all the time. Whenever he did, he would ask her for a paper towel so he could clean it up himself. Sounds like an unusually responsible kid, right?

Well, not quite. Turns out, his version of “cleaning up” was really just playing in his own pee puddle. One time he even brought his stuffed animals to play “splash party.”

These are just a few of the potty training funny stories we’ve seen. There are hundreds more out there that will make you laugh, cry, laugh until you cry, and most importantly reassure you that every parent has trouble potty training. It isn’t just your kid who’s peeing in the neighbor’s yard or handing you their poop.

To read more funny parenting stories and get some great parenting tips, check out the Parenting section of our site.