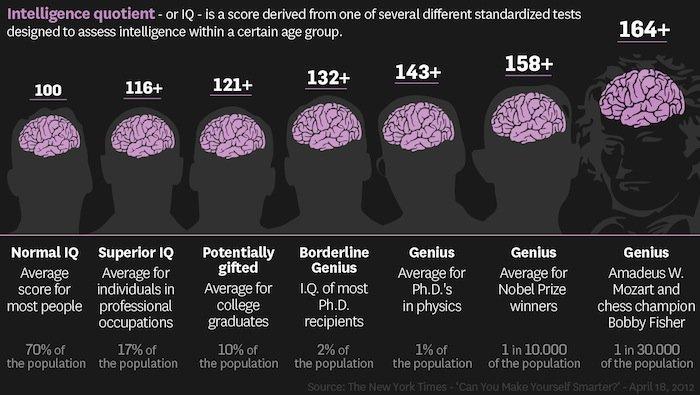 We are all intelligent. There is no question about it. It’s just how we express it.

I always thought the quietest people are the most intelligent ones.

They just sit aside and observe. When they have something smart to say, they say it in the best way possible.

That’s just me. There are people who have high IQ and talk all the time, too.

It’s tough to keep what you know deep in yourself.

You probably know, IQ stands for Intelligence Quotient. It comes from a German phrase.

A psychologist William Stern first brought it up.

It shows the level of intelligence and ability to learn. This level is largely based on standardized tests.

With that being said, I found some interesting facts for IQ. They will entertain your brain and make you learn something new.

According to Psychology Today, kids who are breastfed are likely to have higher IQ levels by 3-8 points than kids who are not breastfed.

This solves the mystery behind the birth order. The older kids in the family don’t have bigger IQ. That’s a myth. IQ largely depends on genetics, gender, age, personality, family size, and parental age.

According to Swedish researchers, the link between lower IQ and suicidal thoughts is really big.

People with low levels of IQ struggle to find the proper solution more than the others. This leads to mental stress that results with suicidal feelings.

IQ is Related with Simple Abilities and Head Size

We often hear how people with bigger heads have bigger brains and IQ. This could be true. Partially.

A discovery talks about people with lower IQ and their less efficient nervous system.

It’s said that people with measurable IQ will struggle to bring immediate and obvious decisions more than those with a more efficient nervous system.

Performing something depends on your IQ. This could be really stressful for people with lower IQ.

The complex jobs look like a dead end for them.

IQ above 115 means doing any job with less difficulty.

Even though we don’t want to hear about this, studies have shown that there is a slight difference between the IQs.

The difference is really small.

Studies just brought out the obvious. People with higher IQ levels are more confident in what they do.

Those who are aware of this push themselves to the limit and usually match the expectations.

IQ is affected by the environmental factors

Scientists also found that education affects IQ. Students who are studying finance are more likely to have higher IQ than others.

Creativity is Linked to IQ

Of course it is. Dr. Scott Kaufman has revealed that creativity is measured by IQ tests.

It involves innovative ideas, reasoning, pattern detection, and learning. All of these are measured by IQ testing.

In other words, that was just the beginning.

This was done in situations when there was mental retardation or mental illness, which was misunderstood in that century.

The IQ tests are always criticized about their ethnic and cultural bias. It’s said they lack sensitivity to different cultures and religions.

Now you know more about IQ and what it means.

It’s your turn now. You can share this with your friends like I did. Use the sharing buttons below.